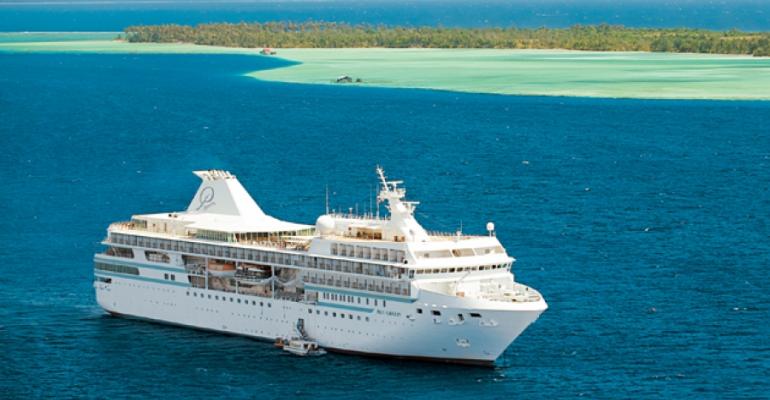 Paul Gauguin has a long connection with Australia

Wiltrans International, general sales agent for Paul Gauguin Cruises, has released fares for seven-, 10- and 11-night sailings aboard the 332-passenger Paul Gauguin that include return economy class air travel.
The lead fare for bookings made by July 31 is A$5,100 per person, double occupancy for a seven-night round cruise from Papeete that includes calls at Huahine, Taha’a and overnights in Bora Bora, Moorea and a final night in Papeete.
Complimentary wines and spirits and on-board gratuities are included and passengers fly with Air Tahiti Nui/Qantas from Sydney, Melbourne or Brisbane.
A highlight of the cruise is a day on the private island of Motu Mahana off the coast of Taha’a. It is a post-card setting with crystal clear water, a white sandy beach and palm trees, where passengers relax in canvas deck chairs under matching umbrellas. A barbecue lunch with full bar service is offered.
Paul Gauguin has a long connection with Australia. Its namesake, who was born in Paris, sailed from France to Papeete in 1891 via the Suez Canal, the Seychelles, Australia—calling at Adelaide, Melbourne and Sydney—and New Caledonia.
Gauguin went back to France in 1893 but returned to Tahiti again, departing Marseilles on July 3, 1895, aboard the steamer L’Australien for Sydney where he transferred to Tarawera for the trans-Tasman voyage to Auckland. He signed the Auckland Art Gallery visitors’ book before joining Donald & Edenborough’s steamer Richmond for the final leg to Papeete where he produced his finest masterpieces before his last voyage in 1901 to Atuona on the island of Hiva Oa.
In 2012 the 19,200gt Paul Gauguin, which was purpose-built for cruising French Polynesia in 1997, underwent a US$7m refurbishment in Brisbane.
Copyright © 2022. All rights reserved. Seatrade, a trading name of Informa Markets (UK) Limited.
TAGS: people cruise lines source markets air/sea
0 comments
Hide comments
Related