Ovation of the Seas: reaching out to China 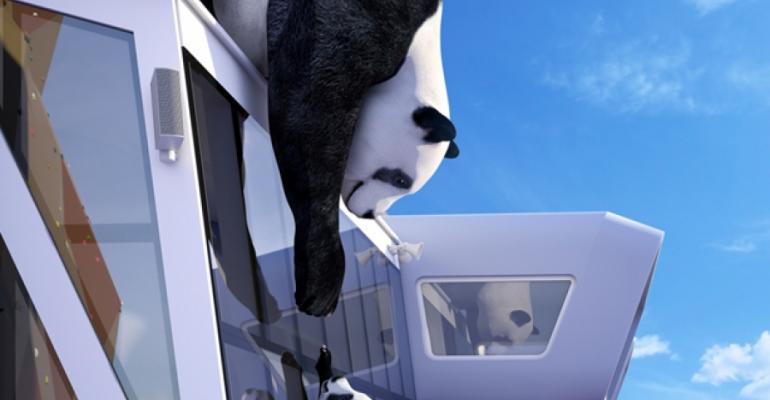 Rendering of Giant panda and cub high atop of Ovation of the Seas. The artwork will be placed on the ship today in Southampton

With dual-language English-Mandarin signage widespread throughout the ship, a noodle bar instead of Johnny Rockets, a massive Cartier shop, rows of multi-various gaming slots and a larger than life 33ft giant panda leaning off the top deck reaching out a paw to a pick up a cub one deck below there is no mistake where Ovation of the Seas is headed.

Showcased to media and UK travel agents Monday in the Port of Southampton, Royal Caribbean International's newest ship and third Quantum-class vessel is the first to include elements specifically aimed to make Chinese guests feel at home.

Major changes from its two sisters are an extended retail area spread on Decks 4 and 5 including Cartier, Omega, Swarovski and first Kate Spade at sea. 'The Chinese are massive shoppers so we have increased the retail by 1,000sq feet,' commented Michael Bayley, brand president.

Food-wise, in place of burgers and hot dogs is Kung Fu Panda Noodles and in the Solarium, the menu will switch from Mediterranean cuisine to hot pot vegetables and protein options hand picked and cooked at the table when the ship sails from its home port, Tianjin, in June.

By that time also, 30% of the crew will be Mandarin-speaking, 100% for customer-facing roles.

Another first will be the China naming of Ovation by a Chinese actress, Fan Bingbing, acting as goddess, or godmother.

Entertainment venues are the same as Quantum and Anthem but the shows will be shorter and not West End performances. 'The shows feature acrobatics, dancing and singing lasting about an hour which is perfect for the Chinese who love Two70 and the giant digital screens and close proximity to the performers,' commented Ben Bouldin, director of UK sales RCI.

Some 30-40% of the $4.5m art collection is by Chinese contemporary artists, including ceramics, animated and interactive digital pieces. Popular is a large butterfly wall with touch screen area where passers-by can make the colourful butterflies fly across the screen by touching each individually.

Massive steel-like floor to ceiling bamboo sticks line The Via public space on Deck 5 leading to the Royal Esplanade.

Still many of the signature Quantum-class spaces, dining areas and activities are left unaltered on Ovation such as Michael's Genuine Bar, Sorrento's pizzeria, Chops Grille, Jamie's Italian by Jamie Oliver, the Bionic Bar, Two70, Outdoor Movie Screen, North Star, SeaPlex, FlowRider and Ripcord by iFly. Referring to the latter three, Bayley said: 'There is a huge demand in China for these types of product.'

Before Ovation sets off on a 52-night repositioning cruise to Asia/Australia there are three short getaways from Southampton starting later this week. All are sold out, according to Stuart Levin, md UK & Ireland RCI, who took Ovation's short stay in the UK to bring aboard 650 travel agents, many of them new to cruise.

'Apart from the ex-UK sailings on Navigator, Independence and the short season with Ovation, we are seeing a growing number of our passengers prepared to jump on planes to join Royal ships in New York, in the Med and Caribbean,' Levin said.

Bouldin believes in the next 12-18 months more UK passengers will be heading to Asia to join an ex-China sailing. 'For new to cruise packaging a pre- and post- stay in China with an ex-China sailing provides a very comfortable way to sample China, Japan and Korea.'

Two years ago 40% of our passengers chose a fly cruise. That now stands at 60% and I can see the UK sourcing for China cruising growing in the coming year', he added.

'While Ovation is suitable for Chinese it is not unsuitable for UK guests,' he told Seatrade Cruise News.

After China, Ovation will give Australians their first taste of Quantum cruising before the ship heads to Singapore and then back to China.