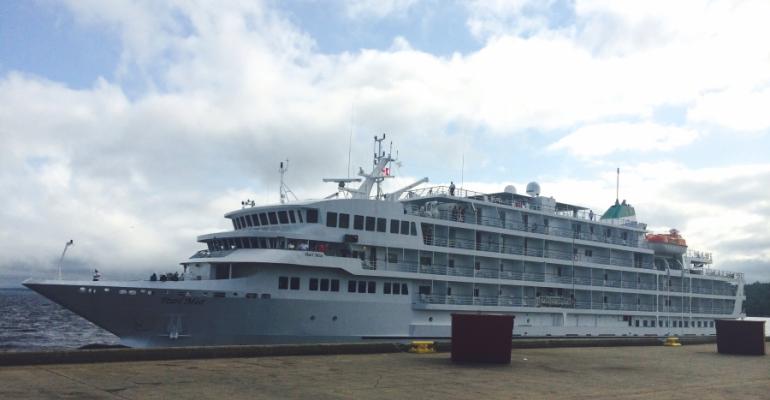 Pearl Mist alongside in Shelburne

Pearl Mist's visit was 'great for the community' which has not seen cruise ships since the 1990s, according to Eyra Abraham, tourism and events coordinator for Shelburne.

The vessel docked safely and on schedule, she said, but had to alter the rest of its Canadian itinerary due to Hurricane Arthur. By the time Arthur reached Nova Scotia, it had degraded into a tropical storm yet still was strong enough to knock out power in some areas for a number of days.

Before entering service, Pearl Mist had been tied up in Shelburne for part of the time Pearl Seas Cruises and Irving Shipbuilding of Halifax were in a legal dispute.

Following its stop last week, Pearl Mist is scheduled to return on a fall foliage cruise in 2015.

The Nova Scotia Tourism Agency, which markets the major ports of Halifax and Sydney along with half a dozen smaller ports, recently began working with Shelburne, according to sales officer Linda Murphy, who met with cruise line representatives and media during Cruise Shipping Miami. There, she stressed the variety and depth of experience the destinations can offer and noted Pearl Seas Cruises provides opportunities for the province's boutique ports.