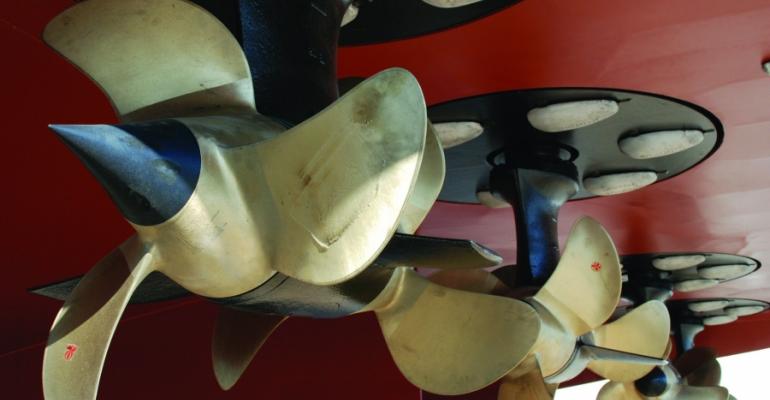 A-ROSA AQUA, one of around 40 ships equipped with SCHOTTEL propulsion systems

Since SCHOTTEL Group introduced  its twin propeller STP200 propulsion concept for river cruise vessels five years ago, the Spay, Rhine headquartered company has supplied around 40 European river vessels, either in operation or under construction.

Splitting the propulsion units from the conventional two to four Twin Propellers, reduces the draught of the ship to approximately 1.60mtr, says SCHOTTEL, enabling ships to sail smoothly even in shallow waters.

The elastic mounting of the STP effectively damps the pressure impulses induced by the blades. The reduced diameter of the propellers allows a spacious clearance between the propellers and the hull and results in a low structure-borne noise level, it claims.

The small propeller diameter of 1,050mm requires only minor tunneling of the ship’s stern. In contrast to high tunnelled ships, the designed stern lines increase the overall propulsion efficiency significantly.

Additionally, the propulsion system with four SCHOTTEL Twin Propellers 200 has a very low thrust-deduction coefficient thanks to the clearance between propeller and hull resulting in converting almost the entire thrust into propulsive power.

Currently the propulsion concept is available with four mechanical STP 200 in both a diesel-direct and a diesel-electric version as well as with four electric SCHOTTEL Combi Drives (SCD 200). The SCHOTTEL propulsion portfolio for river cruise ships also includes a variety of individually tailored concepts for different river cruise providers. These range from the traditional concept with two SCHOTTEL Twin propellers to river cruise vessels operating with SCHOTTEL Pump Jets as main propulsion units.