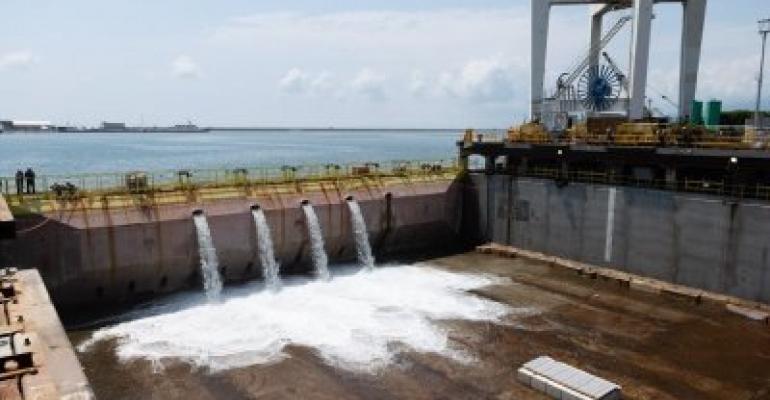 Genoa's Sestri Ponente will be geared up to build the largest cruise ships PHOTO: Fincantieri

The Fincantieri group achieved a €6.5bn first quarter record in orders acquired. Of that, €6.3bn is in the shipbuilding area, almost entirely in the cruise segment, with 11 ships for five brands and an expedition cruise vessel from another customer. Also included is one littoral combat ship for the US Navy.

'The results of the first quarter 2019 strengthen our role as a leader, capable of quickly transforming the soft backlog into firm orders,' Fincantieri CEO Giuseppe Bono said during the group’s board meeting Thursday in Rome.

This gives Fincantieri a key role in Italy's economy, Bono said, with the orders for 11 cruise ships signed in these months translating into almost €27bn generated to the benefit of the territories where Fincantieri has operations.

Fincantieri group is handing over eight ships in 2019, with Costa Venezia and Viking Jupiter already delivered, to be followed by Sky Princess and Carnival Panorama in October. Vard has already delivered Le Boungainville to Ponant and Hanseatic Nature to Hapag-Lloyd Cruises, both in April. Ponant's Le Dumont d’Urville and Hapag-Lloyd's Hanseatic Inspiration are to come.

The soft backlog (options) amounts to 10 ships, including cruise and naval vessels.

With the acquisition of Vard, Fincantieri implemented a model where the Romanian shipyards are devoted to hull construction while the outfitting follows in the Norwegian yards. Although this model has significant benefit in the production timeline, there were sub-optimal cost benefits, they said.

Romanian yards to gear up for full cruise shipbuilding

As part of a wider plan where all the cruise business comes under Fincantieri’s merchant ship division, including the related activities of Vard, they unveiled that Vard yards will focus on offshore and special projects while the facilities in Romania are being enhanced to carry out the full building of cruise ships.

At the same time, Fincantieri is working to increase the capabilities of its Italian shipyards. Among the main projects, the group and local institutions are finalizing a plan to improve Genoa-Sestri Ponente shipyard to build the largest cruise ships requested by the market.

'We hope to start with activities at the shipyard by September' as part of a multi-year, multimillion-euro upgrade project, Bono said this morning at a Genoa news conference.

Speaking about Fincantieri’s current and future growth plans, Bono cited strategic initiatives in the naval business area and in the development of an in-house center of excellence for engineering and information technology services.

Diversification also involves infrastructure, including a production plant inaugurated in the recent quarter and a steel-cutting ceremony for the new bridge to replace the collapsed Morandi viaduct in Genoa.

In sum, Fincantieri faces a challenging year with many projects, which Bono said will allow the group to show its 'excellent production and system integration capabilities.'

On a side note, Fincantieri's board is now split equally between men and women, a diversity that's beyond the regulatory requirements.