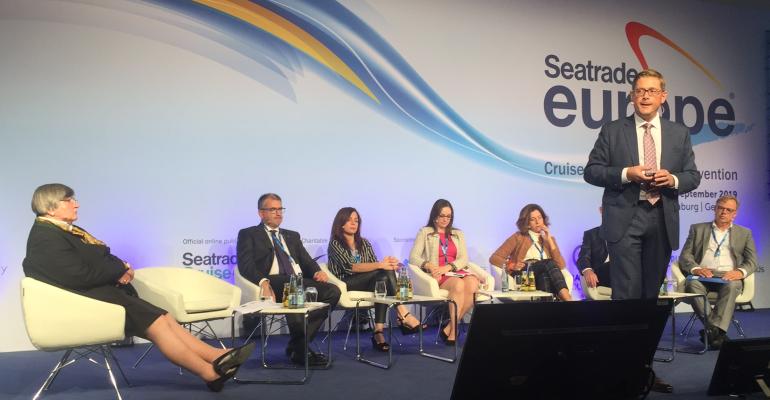 Smart communication and transparency are, according to industry experts, keys to deal with wrong prejudices circulating about ocean cruising in certain circles. At the same time, existing challenges need to be addressed globally rather than with a rag rug of local regulations.

Industry should communicate stronger and smarter

Talking about numerous initiatives already taken (such as LNG powered ships and shore power) but also stressing the industry had to give prove points of its continuous sustainability strives, Kunze advocated a maximum of transparency as well as ‘stronger and smarter communication’ as the keys to address wrong prejudices about cruising circulating in parts of the pome quarters.

Mentioning the ports as key partners to change public perception, Kunze said the industry should have no secrets and open its ships to all kinds of interested parties from Kindergarten groups to politicians.

Bødker and Rougier confirmed the important role of ports in that context, adding that ports were increasingly met with inquiries about the specific impacts of ships handled locally.

Bødker said that, in order to answer such inquiries, the ports needed more information from operators, and Rougier confirmed that work to define and harmonise the gathering of such information will get underway in October through a new committee including among others the International Association of Ports and Harbors (IAPH).

Analysing among others new regulation for the Heritage Fjords brought underway in Norway, the panellists agreed that effective sustainability progress needs global approaches rather then fragmented (and possibly contradicting) local initiatives.

Talking about alternative propulsion, Francioni confirmed that LNG application will continue to develop. He outlined it was a complex topic, in particular with regard to reliable supply schemes, but constitutes a good solution to reduce environmental impacts.

Also shore power – if gained from renewable sources, as it is for example mostly the case in Norway due to the country's numerous hydropower plants – was mentioned as a solid and potential-bearing approach by the panellists, although its complexity was often underestimated, as among others Kunze stressed.

Confirming that cold ironing was ‘not an easy thing’, Kunze said AIDA nevertheless gained positive experiences in Hamburg and was ready to extend the application of shore power as most of its ships have meanwhile been configurated accordingly.

AIDA's VP Communication & Sustainability stressed the importance of teamwork in that context, citing the example of Kiel where AIDA is currently cooperating with the Port to get a shore power plant ready for the upcoming season.

Stakeholders integrated into this project include the local municipality and its parties, among others the Green Party.

Talking about Hamburg's experiences with cold ironing, Rougier confirmed the objective was to extend the availability of cold ironing to all three terminals, particularly as cruise line's requests for cold ironing have on occasions to be turned down today as the respective ships cannot be handled at the Cruise Center Altona where the city's first shore power plant is in operation since 2016.

Rougier though also commented it made no sense if just a few ports – including Hamburg – were prepared to supply shore power to ships. She said that, not at least in order to justify respective investments required from the cruise lines, many more ports should apply this technology.

Various panellists voiced and concerns and doubts about researches of cruise ship operation impacts launched by NGOs in the past. As an example, Metsola claimed that air emission studies were often based entirely on the sort of fuel and fuel quantity burned, while the significant effect of after treatment systems was not taken into account.

With regards to managing cruise ship calls in port, she said the number of arrivals should be planned carefully, taking into account the specific local capacity.

Garcia added that, again, a realistic picture was required, citing the much-debated examples of Barcelona and Palma de Mallorca. Garcia claimed cruise ship calls accounted for only ten percent of the total tourism in these two cities, adding that shore excursion effectively took more than half of the incoming passengers out of the city centres to other destinations.