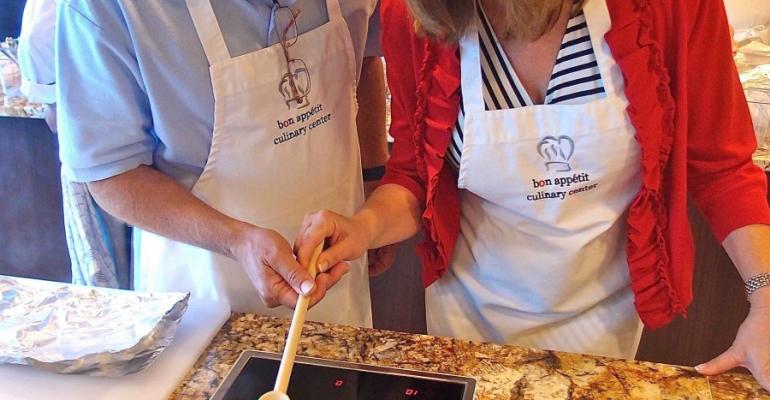 Satisfaction with cruising has peaked since the travelhorizons survey commenced in 2007. Pictured are cruisers taking part in a Bon Appétit Culinary Center class aboard Riviera (Photo: Anne Kalosh)

Satisfaction with cruising has reached an all-time high despite past negative publicity about safety and hygiene-related issues, according to a survey by MMGY Global.

The travel intentions of US adults remain strong, perceptions of travel's affordability are up and the number of people who plan to travel alone is edging higher, found the latest national travelhorizons survey of 2,300 adults conducted by marketing services firm MMGY Global.

Six of 10 adults surveyed in July plan to take at least one overnight leisure trip during the next six months, unchanged from the robust level recorded during the comparable period in 2014. Travel intentions have been rising since the end of 2013.

Given the 14-point increase observed during this most recent wave, satisfaction with cruising (146) is now at the highest level recorded since the commencement of the travelhorizons survey in 2007. Satisfaction with airlines (114) is up eight points, and satisfaction with both lodging (126) and rental car companies (124) increased six points.

MMGY Global's overall Traveler Sentiment Index, a measure that derives from US adults’ interest in travel, time for travel, personal finances available for travel, affordability of travel, quality of service and safety of travel, now stands at 111, up three points from the same time one year ago (108), and just six points below the record 117 reported in February 2015.

Reflecting consumers’ more positive outlook on their personal financial situation today versus one year ago, the perceived affordability of travel (169) displayed the largest increase from the same period in 2014—up 38 points—while personal finances available for travel (115) and interest in travel (106) also increased. Time available for travel (106), quality of service (114) and the perceived safety of travel (95) remained relatively unchanged from one year ago.

By comparison, only 17% of Gen Xers, 19% of boomers and 18% of matures plan to take at least one leisure trip alone during the next six months. While all solo travelers (regardless of age) say their reason for doing so is ‘they are free to set their own itinerary,' millennials are significantly more likely than boomers and matures to travel alone for ‘the adventure’ (38%) and ‘to learn about themselves’ (26%).

Most travelers (56%) who intend to travel alone plan to do so in the US, while two in 10 (18%) plan to visit an international destination.

MMGY Global's travelhorizons is a quarterly survey of Americans’ travel intentions. This latest iteration of the nationally representative survey of 2,306 pre-qualified adults was conducted from July 16-23. Statistically significant differences are cited at the 95% level of confidence.

MMGY Global is a large, integrated global marketing firm with more than 35 years of experience in the travel, hospitality and entertainment industries. The agency maintains a global communications practice in all marketing channels, serving many of the world’s premier travel and tourism brands. Offices are in Kansas City, Missouri; New York City, Orlando and Fort Myers, Florida; and Madrid.