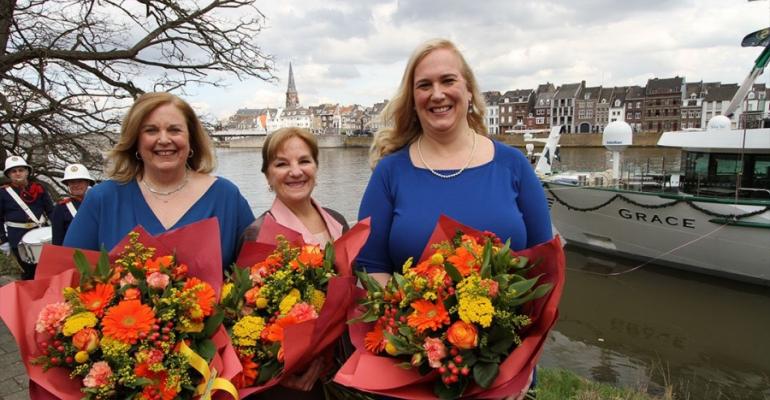 In a ceremony replete with the tunes of a marching band, speeches from local dignitaries, and the traditional smashing of champagne, Tauck family members and executives joined with selected partner suppliers and travel agents to celebrate the naming of its river vessel Grace in Maastricht, the Netherlands on Sunday.

The launch comes as Tauck is more than doubling the size of its European river fleet, from four vessels at the start of 2014 to nine later this year with the June christening of another new ship, Joy.

Along with the suites, Grace has eight 225sq ft Loft cabins located on its lower (Emerald) deck, an additional 24 junior suites of the same size on the Ruby (middle) deck, plus a total of 13 cabins ranging from 150 to 190sq ft split between the Ruby and Emerald decks.  All suites and cabins feature in-room movies, minibar, individual heating and cooling controls, luxury toiletries, and plush bedding with 100% goose down pillows, 400-thread-count linens and pillow-top mattresses.

Grace will sail on itineraries along the Rhine and Moselle Rivers. Tauck recently announced its 2017 river cruising plans, which include a new family itinerary on the Seine and a doubling of its total family river cruise departures.  Tauck has also announced the reconfiguration of five 110mtr long river ships in its fleet, to be completed in stages over the next two years.