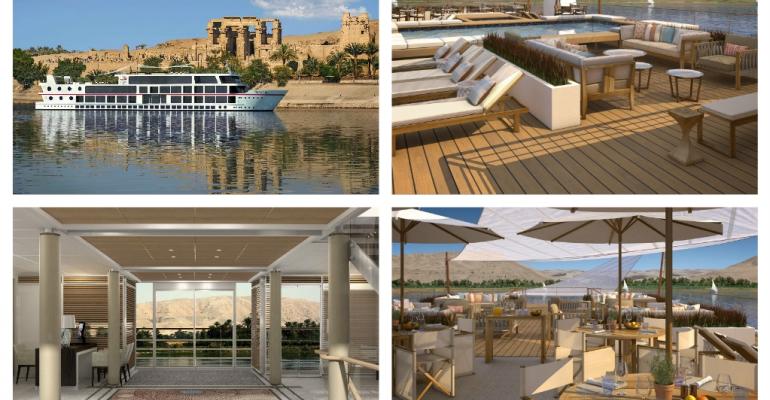 A recently acquired Nile River vessel is being stripped down to the steel in a complete renovation that reflects Viking River Cruises' Scandinavian design.

'Egypt is one of the most intriguing countries in the world, and it remains a top destination for many of our guests,' Viking Cruises chairman Torstein Hagen said.

During the 12-day 'Pharaohs & Pyramids' itinerary, travelers will explore Egypt’s cultural treasures in seven destinations. The cruise-tour begins with a three-night stay at a first-class hotel in Cairo, affording visits to sites like the Great Pyramids of Giza, the new Grand Egyptian Museum and the Mosque of Muhammad Ali.

After flying to Luxor, participants will visit the temples of Luxor and Karnak before boarding Viking Ra for an eight-day round-trip cruise on the Nile to Aswan, featuring Privileged Access to the tomb of Nefertari in the Valley of the Queens and excursions to the Temple of Khnum in Esna, the Dendera Temple complex in Qena and a visit to a Nubian village with a stop at a traditional elementary school. The journey concludes with a flight back to Cairo for a final night in the city.

Rebuilt as an all-suite vessel, Viking Ra's interiors will be designed by the same team responsible for the Viking Longships. The look will mingle Scandinavian design and local influences like traditional geometric Arabic patterns and terrazzo floors.

The Restaurant will serve three full meals and a selection of regional and international fare. Other rooms include a clinker-built bar, The Lounge with floor-to-ceiling glass doors and The Spa for massages and other treatments.

Three accommodations categories, each 291 square feet, include 20 Veranda Suites with a full-size veranda in the living room and a French balcony in the bedroom. All suites have premium amenities such as a hotel-style bed, luxury linens, sofa, bathroom with shower, air conditioning and flat-screen televisions.

In addition to two Jacuzzis, Viking Ra features a pool at the back of the ship, while a sanctuary from the sun is provided by sculptural 'sail-shades' inspired by local dhows and intricate mashrabiya-influenced screens surrounding the Pool and Sun Deck.

Viking’s Culture Curriculum includes a Nubian evening event on board and a local experience riding a camel. Additionally, an expert Egyptologist leads all excursions.