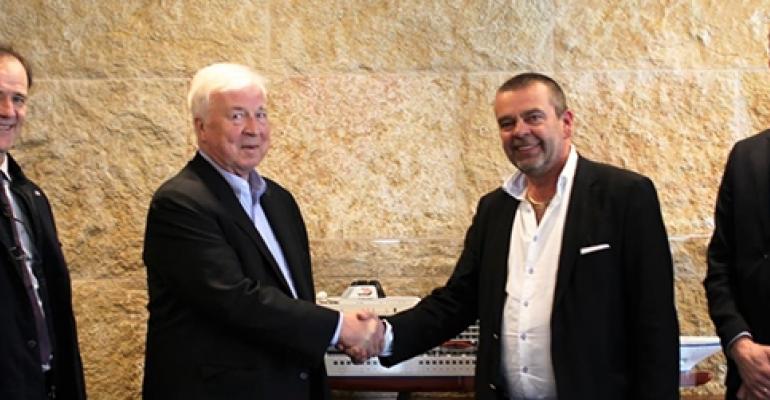 Viking chairman Torstein Hagen (second from left) shakes hands on Vard deal for 2 plus 2 newbuilds
Vard Holdings Limited, a subsidiary of Fincantieri, signed a letter of intent for the design and construction of two ‘special’ cruise ships for Viking Cruises, plus two options.

The parties plan to enter into final contract by mid-2018 with deliveries scheduled from Vard in Norway, in 2Q 2021 and 2Q 2022 respectively.

The hulls will be built by Vard in Romania.

Roy Reite, ceo and executive director of Vard, commented ‘It is our pleasure to work with Viking to develop a new series of cruise vessels. The company is well known for its expansion in river and ocean cruises, and they are now looking to Norway for the design and construction of its new cruise fleet.’

These will be the first ships that Vard will build for Viking, although starting from 2012 parent Fincantieri received orders for ten 47,800gt newbuilds from Viking, four of which have been delivered and the remaining six vessels will be completed in Italy through to 2023.

Just last month Fincantieri and Viking reached an agreement for a further six ships, which expands the horizon of their partnership until 2027.

According to Fincantieri, the new project is ‘totally innovative’ and will be developed by Vard Design in close cooperation with Viking, ‘according to the highest safety and reduction of the environmental impact standards, drivers which have increasingly greater weight also in the cruise sector.’

In October 2016, Viking chairman Torstein Hagen told Seatrade Cruise News, LNG propulsion was ‘too costly’ to be the cards for Viking’s future newbuilds and that ‘further environmental advances were being studied’.