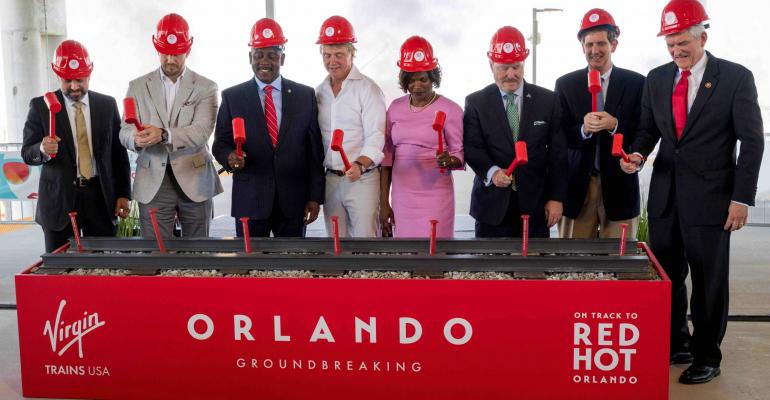 This will serve to transport travelers — including cruisers — between Orlando International Airport and South Florida. Currently Virgin Trains operates between Miami and West Palm Beach with a stop in Fort Lauderdale.

'Connecting Orlando and Miami, two of our nation’s greatest cities, will provide tremendous economic and environmental benefits that will be an asset to Florida for generations,' Virgin Trains President Patrick Goddard said at a commemorative ceremony.

Virgin Trains' Virgin MiamiCentral hub is located near PortMiami, and the Miami-Dade County Commission is deliberating the feasibility of a station directly at PortMiami.

MSC Cruises is the official cruise line partner of Virgin Trains but passengers sailing from South Florida ports with any line can take advantage of 'Train to Port' packages.

It has been 150 years since the ‘golden spike’ ceremony in 1869 that marked the joining of the Central Pacific Railroad from the West with the Union Pacific Railroad in the East and the completion of the United States’ first trans-continental, coast-to-coast railroad line.

Monday, Virgin Trains announced the start of the ‘red spike era’ and the company’s commitment to reinventing passenger rail service in America by providing fast, efficient, hospitality-driven transportation that connects dynamic, complementary cities and congested corridors that are 'too close to fly and too long to drive.'

Virgin Trains is developing 170 miles of new track into the intermodal facility located in the new South Terminal at Orlando International Airport as part of the company’s Phase 2 expansion into Central Florida.

The massive infrastructure project encompasses four zones including the area of the Orlando International Airport and the Virgin Trains Maintenance Facility. This monumental endeavor, which will use 225m pounds of American steel, will include laying 490,000 ties and transporting 2.35m tons of granite and limestone by 20,000 railcars. Additionally, approximately 2m spikes and bolts will be hammered and put in place over the next 36 months.

Virgin Trains’ strategic expansion into Orlando, the nation’s most visited city, comes as travel to the Sunshine State is at an all-time high. Orlando International Airport welcomed a record 47m passengers last year and more than 126m out-of-state visitors traveled to Florida in 2018, according to Visit Florida.

With service to Orlando expected to begin in 2022, Virgin Trains projects over 6m annual riders in Florida and $6.4bn in direct economic impact to the state.