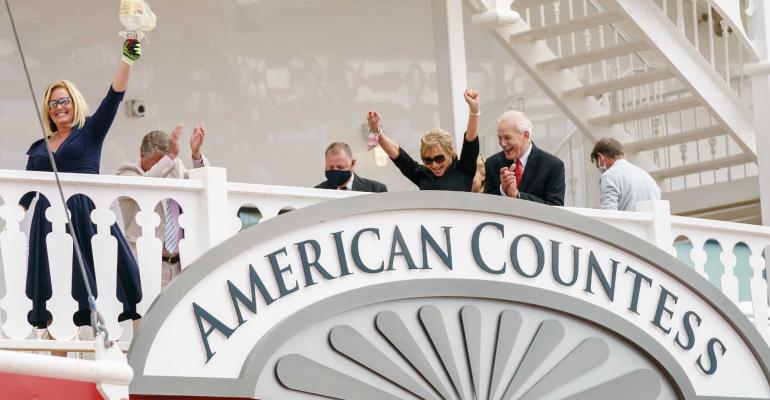 'We listened to our returning guests’ feedback on what they would like to see in a new riverboat and created a contemporary American masterpiece that guests are eager to experience,' Waggoner said.

Built using the hull of former gaming vessel Kanesville Queen, American Countess was lengthened by 60 feet and underwent a total renovation at Gulf Island Shipyard in Houma, Louisiana, to create contemporary interiors and spaces like the portside bar, with an 80-foot panoramic view.

The vessel was completed last year, but its inaugural festivities were repeatedly delayed by the pandemic.

'Year after year, American Queen Steamboat Company has played an essential role in the US river cruising renaissance, benefiting the state of Louisiana from building boats in our shipyards, showcasing our iconic river cities and quaint towns to putting a spotlight on our state through its marketing efforts,' Nungesser said. 'It was an honor to see this Louisiana-built gem today, and I look forward to her bringing thousands of travelers through The Pelican State.'

AQSC has just resumed sailing, with American Duchess returning to service March 15 on the Mississippi River with reduced guest capacity. American Empress in the Pacific Northwest and flagship American Queen in the US heartland are expected to sail later this year.

Following the naming, American Countess set off on a weeklong VIP cruise to Memphis, calling at Nottoway and Natchez.

AQSC is returning to passenger operations with protocols that include a mask mandate in all public areas where social distancing is not possible, 100% testing of all passengers and crew and mandatory COVID-19 vaccination for all guests and crew that will go into effect for sailings beginning July 1.