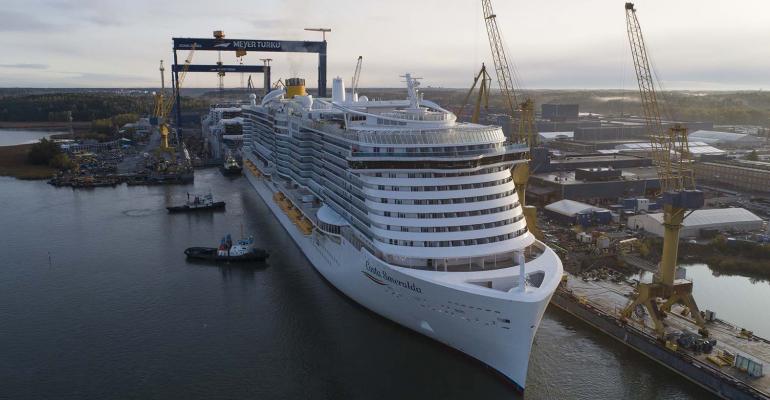 Costa Smeralda was delivered by Meyer Turku in late 2019. The yard's orderbook extends to 2025

A late 2019 study by the University of Turku’s Brahea Center found the shipyard is very important to the economy of Turku and southwest Finland. The economic benefits extend to the whole country because three-fourths of the yard’s direct supplier companies are domestic.

Key financial figures in the study are mainly from 2018 but some data from 2019 was used.

Meyer Turku's orderbook currently extends to 2025, 'and the amounts reflect well the growth in our production,' said Tapani Pulli, deputy yard director. 'We can expect that the growth continues also in the following years,’

Despite differences in the values of orders, the number of suppliers remained nearly unchanged. In 2018, the shipyard had a total of 1,246 direct supplier companies; 927 were domestic and 319 were international.

After Finland, the largest supplier country was Germany, responsible for 72% of the value of the foreign supply orders. In domestic supply orders, the focus in the euro-weighted orders was in southwest Finland (48%), especially Kaarina (27%). When it came to domestic supplier companies, there was an even division between Uusimaa and southwest Finland, each with a 40% slice.

Germany’s strong growth is due to the fact that Meyer Turku received floating engine room units for cruise ships from Meyer’s shipyard in Rostock, Pulli explained. And Kaarina’s share is mainly because of strong growth at the cabin module factory, Piikkio Works.

Meyer Turku is the fourth largest employer in southwest Finland after the city of Turku, the University of Turku and Valmet Automotive. It is the second largest industrial employer.

The impact on general employment is even greater but it was not possible to clarify the impact of foreign companies and secondary suppliers on employment within the framework of the study.

However, Karvonen said a good rule of thumb is that yard workers are responsible for about 20% of a ship’s production and the remaining 80% is by the supplier network.

Some 96% of Meyer Turku employees are in southwest Finland, especially in Turku (88%), so most tax revenue goes to southwest municipalites. However, the biggest amount of corporate tax accrued in Uusimaa, the region that encompasses Helsinki, the capital, and the bulk of Finland’s population.

As a part of the study, the yard’s supplier network was asked to specify skills needed. Some 57 companies of different sizes and fields responded. Two-thirds of those identified skills needed mostly in the areas of  HVAC and electric technology, welding and project management.

Three-fourths of the 52 companies that answered a survey question on labor shortage said companies seek more experts. There is mostly a lack of plate-welders, HVAC and electrical designers, project managers and foremen.

Karvonen said direct employment at Meyer Turku is forecast to grow in the next few years before stabilizing. Highly educated labor will become more important in the future.

A new degree program in technology, mechanical and material engineering beginning in autumn 2020 at the University of Turku will respond to the need for specialized personnel in the maritime industry. The Turku shipyard’s own school also provides a fast path to the specialization in the field.

The city of Turku and Meyer Turku commissioned the study.