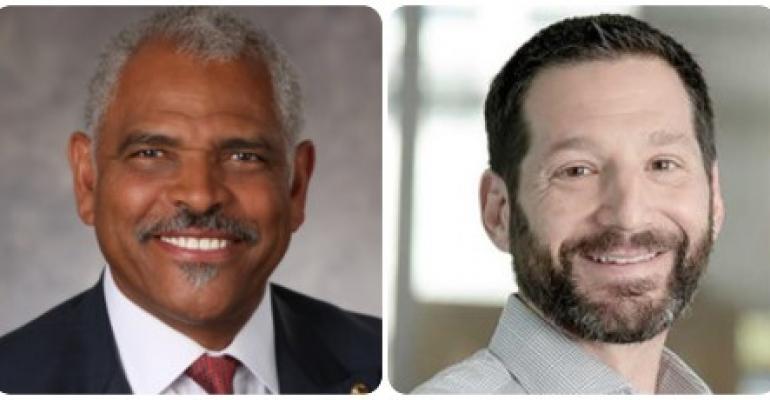 Arnold Donald, left, has led Carnival Corp. as CEO since 2013. Josh Weinstein, right, will succeed him in August

Weinstein, 48, is currently chief operations officer and has a deep history at Carnival. Insiders have long identified him as the likely successor to Donald.

'Josh is a proven executive who is well-respected throughout the company, serving in key leadership roles, driving strong business results during his tenure and playing an integral part in stewarding the company through the global pandemic,; Donald said. 'Josh's thorough understanding of our industry, operations and business strategy puts him in a tremendous position to lead the next phase of our company's journey. With his vision, intensity and core values truly aligned to those of our company, I cannot think of anyone better suited for this role than Josh.'

Led Carnival UK, served as corporate treasurer and in legal

A 20-year veteran of Carnival Corp., Weinstein for the past two years as served as COO, overseeing all major operational functions including global maritime, global ports and destinations, global sourcing, global IT and global auditing. During this time, he also oversaw Carnival UK , the operating company for P&O Cruises and Cunard, which he previously managed directly for three years as president.

Prior to Carnival UK, Weinstein was treasurer for the corporation for 10 years from 2007 to 2017, overseeing the treasury, tax, insurance and financial planning & analysis functions over this time period. From 2002 to 2007, Weinstein served as an attorney in the corporate legal department.

For more about Weinstein, see '10 to watch' in Seatrade Cruise Review's just-out issue.

Donald has led Carnival since 2013

Donald has served as president and CEO since 2013, leading the company to the highest profits in its history.

Recently, he's guided Carnival Corp. through the pandemic, with all the company's brands to be carrying passengers in 2022.

A dynamic leader, Donald has also helped reshape the company's fleet profile over his time as CEO, with newer, more efficient and more environmentally advanced ships.