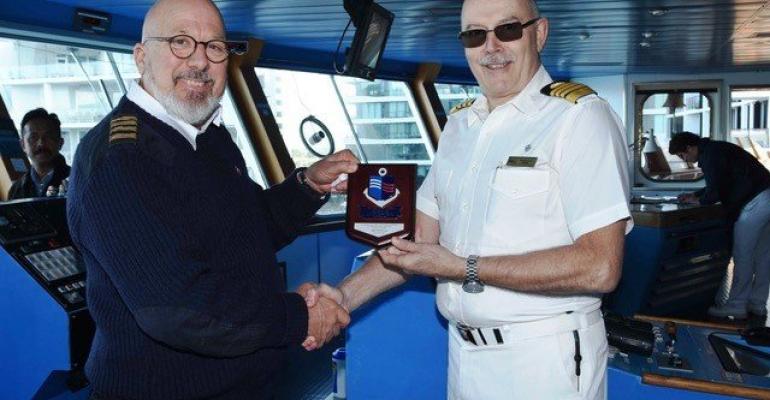 P&O Cruises Australia’s Capt. Salvatore Lupo has chalked up 500 transits of Brisbane over the past 10 years commanding Pacific Sun and later Pacific Dawn, taking thousands of Queenslanders on cruise holidays.

Lupo’s score is higher than all but the most senior marine pilots who guide ships in and out of the port.

‘I like to think during the past 10 years I’ve met about half the entire population of Brisbane,’ he said.

In fact, there are 2.4m people living in Brisbane, the third most populated city in Australia, and Capt. Lupo has carried an estimated 750,000.

As P&O Cruises Australia President Sture Myrmell said, the six-hour transit of the Brisbane River is not exactly a walk in the park.

‘Huge congratulations on completing your 500th Brisbane transit, an extraordinary feat that only a few very experienced Brisbane pilots can match,’ Myrmell said.

‘Few people would know that transiting the Brisbane River is both complex and far from straightforward.

‘Your commitment and skill have been instrumental in P&O’s long term success in the Queensland market.’

Capt. Lupo has mainly used the Brisbane Cruise Terminal at Portside Wharf, with occasional calls at the multi-use terminal at Fisherman Island when Portside was not available. It is located on the north side of the Brisbane River upstream from the Gateway Bridge which blocks the path of larger cruise ships. (As previously reported, a new purpose-built Brisbane International Cruise Terminal will open at Luggage Point next year).

Something new every time

‘Every transit is always different from all the previous ones,’ Capt. Lupo said. ‘I still find the overall experience extremely rewarding. Every time there is something new to learn.’

Capt. Lupo’s 500 Brisbane transits have been recognised by the port’s pilots, with Capt. Peter Liley, MD of Brisbane Marine Pilots, presenting him with a memento.