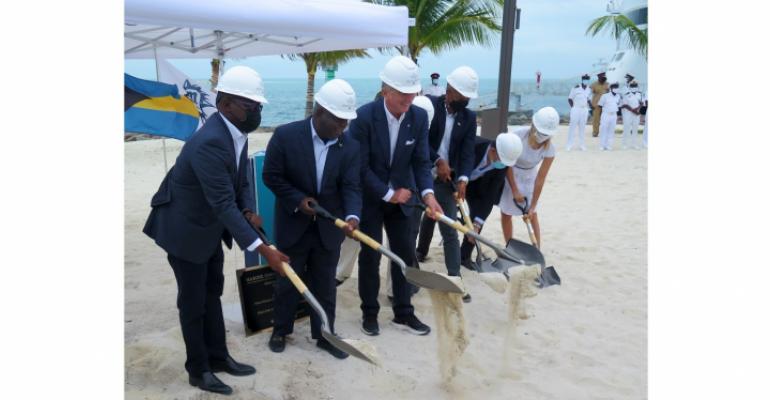 Davis, Vago and other Bahamian leaders and MSC officials took shovels to the sand at the future site of a center that will serve as the focal point for Ocean Cay's mission as a marine reserve.

An urgent and ambitious 'super coral' project under the auspices of MSC Foundation together with the University of Miami Rosenstiel School of Marine and Atmospheric Science and Nova Southeastern University aims to build expertise in coral resilience to rebuild the Bahamas' depleted reefs and develop a model that could be emulated around the world.

When MSC Executive Chairman Vago first set foot on the future Ocean Cay in 2014, it was a decimated former industrial site. Now, thanks to his vision and MSC's herculean efforts, it shows signs of becoming a thriving natural reserve, with nesting loggerhead turtles, birds, fishes and lobster returning and plantings thriving.

The super coral project will use 'cutting-edge science to find solutions' for coral depletion, Vago said.

The effort is in partnership with the Bahamas, which is bearing the brunt of global warming's impacts, including stronger hurricanes and rising sea levels. Prime Minister Davis recently issued a call to action at the COP26 climate summit in Glasgow that highlighted the fragility of the Bahamas.

'Our country is an ocean state,' he said today at the Ocean Cay Marine Conservation Center groundbreaking. 'If we take care of the oceans, they will take care of us.'

Obie Wilchcombe, minister of social services and urban development, told the gathering that MSC Cruises' 'incredible work' has 'defined what partnership means.' He recounted how officials thought Vago was 'a little crazy' when he first came to them with his dream of creating the private island and marine reserve from a blighted cay.

'You've lived up to everything you said you'd do,' he told Vago.

Thursday's event took place during MSC Seashore's call at Ocean Cay ahead of the ship's naming ceremony to take place alongside later in the day.