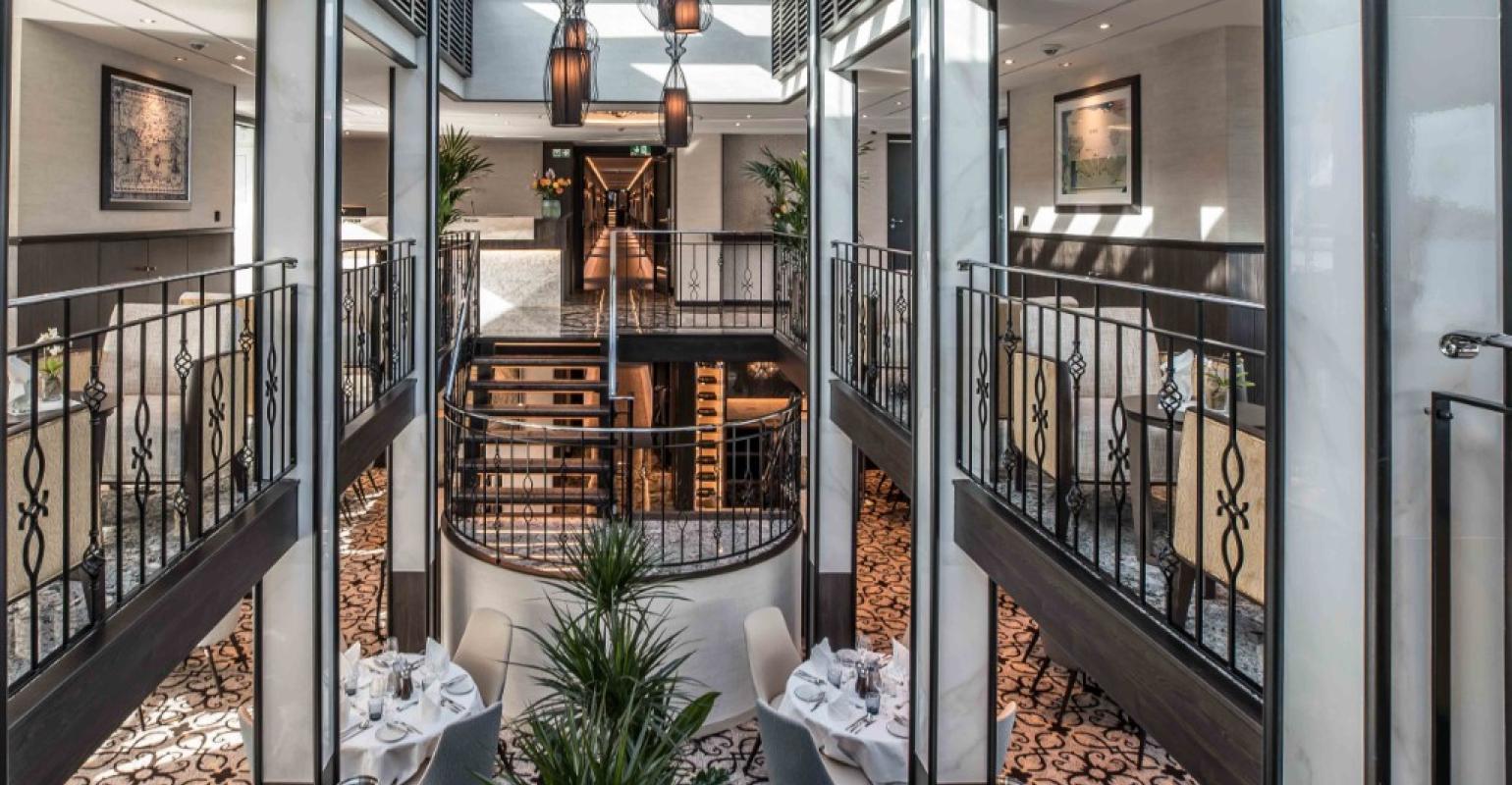 ‘Andorinha is a truly beautiful vessel,’ said Tauck CEO Dan Mahar, ‘and I love the fact that – while she's distinctly different from every other ship in our fleet – she'll still be instantly recognizable as a Tauck riverboat to guests who've sailed with us before.’

A recurring design theme on Andorinha is the traditional painted ceramic tiles, or azulejos, which were brought to the Iberian Peninsula by the Moors and gained widespread popularity in Portugal during the 1500s.

Fabric facsimiles of the tiles accent one wall of each cabin, with the cabin's throw pillows and carpeting continuing the theme.

Within the ship's soaring atrium, railings, carpeting and lamps suspended from the ceiling all boast curving patterns reminiscent of azulejo designs.

The azulejos are perhaps most dramatically presented, however, in a hand-painted tile mosaic map depicting the Iberian Peninsula and its surrounding oceans. Located in Andorinha's reception area and reminiscent of early navigational charts, the three-foot mosaic pays tribute to Portugal's rich maritime heritage of the 15th and 16th centuries.

A second recurring theme aboard are grapevines, reflecting both Portugal's 2,500 years of winemaking traditions and the continued influence of viniculture on Portuguese society today.

Cabins and suites all feature wall lamps with decorative metalwork suggestive of grapevines, and each lamp is backed by accenting wallpaper panels that also echo the theme.

More prominently, Andorinha's reception area features a large, circular, domed ceiling light seemingly entwined in grapevines. Some four feet across, the fixture was crafted exclusively for the Andorinha with brass ‘branches’ that were custom-cast from actual grapevines.

Throughout, numerous furnishings have been sourced from Portuguese suppliers, ranging from some of the ship's lighting fixtures and furniture to the luxury Portus Cale toiletries provided in each cabin. Finally, and along with the Andorinha's decor and furnishings, the ship's name is also rooted in local culture. Andorinhas are a species of small migratory swallow that travel to Africa every winter and return to Portugal each spring.

Andorinha will accommodate 84 guest and is set to sail on its first cruises along the Douro in April, following its christening in Porto on March 31.

Tauck is offering three Douro River itineraries aboard Andorinha in 2020; a 12-day journey that bookends a seven-night Douro cruise with two-night hotel stays in Lisbon and Madrid, an eight-day ‘cruise-only’ itinerary along the river, and an eight-day Tauck Bridges cruise designed specifically for families.