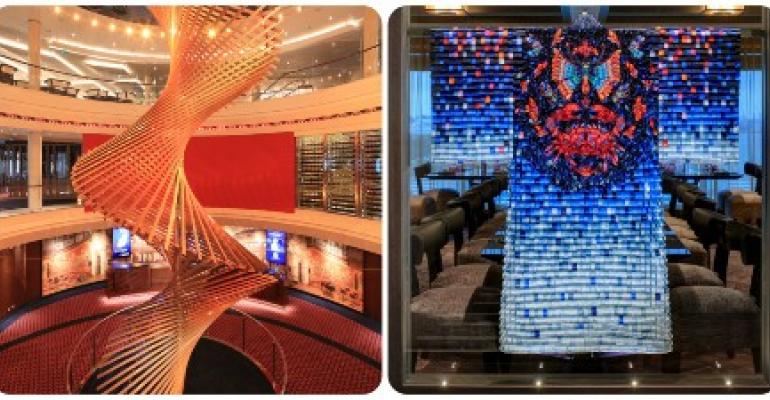 The multimedia collection was curated by Oslo-based YSA Design and London-based ArtLink, which collaborated with Tihany Design. The result is a museum at sea with 2,645 diverse works ranging in value from $500 to $620,000 throughout public areas and staterooms.

More than 37 nationalities are represented by Rotterdam's artists, with the greatest number of contributors coming from the Netherlands, United States and United Kingdom.

This is the seventh ship in the Holland America fleet to bear the Rotterdam name. Some artworks from Rotterdam VI, which left the company in 2020, have a new home on this latest ship. Eight historical paintings are now on Rotterdam, including depictions of Rotterdam I, Rotterdam II, Rotterdam III, Rotterdam IV and Rotterdam V.

The vessel also hosts three previous Rotterdam ship models, and the bell from Rotterdam VI can be found in the Crow's Nest.

The largest and most expensive piece is 'Harps,' a 7.5-ton stainless steel sculpture in the atrium that spans three decks. With dynamic color-changing spot lighting and a mirrored ceiling, the work is a striking focal point. It was produced and designed by ArtLink, based on a concept by Tihany Design, and is valued at $620,000.

The smallest works are by Betty Pepper, who uses reworked books and adds intricate details and scenes made from old maps. They can be seen in the forward stairwell between decks 7 and 8.

Each of the stairwells has a theme — architecture, music or zoology.

Italian artist Federico Picci contributed conversation-starters that tie in with the ship's design, imagining how music would look if it could been seen. In one image, balloons float out of a piano.

One of the most striking and expensive pieces is a dazzling, illuminated crystal 'Key' (treble clef) by Dutch artist Hans van Bentem for Deck 3, midship. The piece is valued at $27,000.

Considered among the most avant-garde pieces in the collection is a fiberglass sculpture of an otter in the aft stairwell lobby on Deck 9 by Spanish artist Okuda San Miguel.

In the embarkation area is 'Billie Holiday' by Ani Abakumova, made of three miles of threads, 8,000 threads in total and created using an algorithm. One of the most valuable works is a mixed media on canvas piece in the forward stairwell lobby on Deck 8 by Mehdi Ghadyanloo, an Iranian artist known for his gigantic trompe l'oeil-style murals.