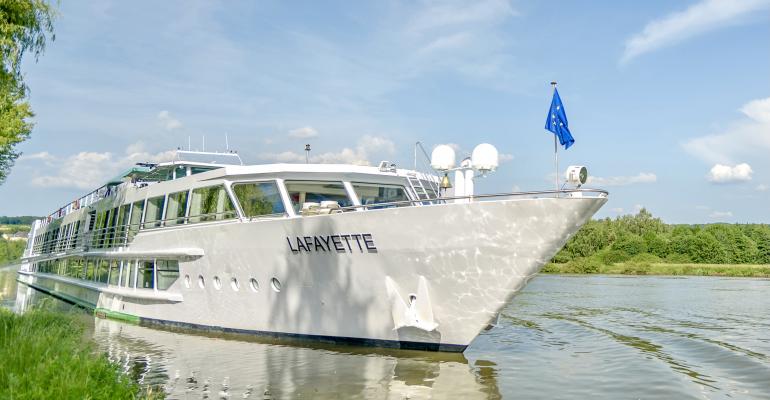 Lafayette cruising on the Rhine

Strasbourg-based CroisiEurope is restarting itineraries from June with Portugal river sailings first, followed by cruises on French rivers and German rivers in July.

It will then be the turn of the Seine and the Gironde on June 30, the Loire and the Rhine on July 2, the Rhône on July 3.  The Loire, Provence, Marne, Bourgogne canals, as well as the Marne-Rhine, the Rhone-Rhine and the Doubs Valley itineraries will also open to cruises on July 2.

German river resumption and beyond

July 7 will see CroisiEurope ships navigate on the Elbe, the Oder, the Havel and the Baltic (Germany) and the Danube. On August 19 and 25 respectively, it will be the turn of the Guadalquivir and the Pô.

Cruises on the Volga and Neva, Chobé River and Kariba Lake, Mekong and Along Bay and Egypt will be progressively announced according to health and safety conditions and updates from national authorities, Schmitter added.

La Belle de l’Adriatique (197 passengers) will be the first of the two coastal ships owned by CroisiEurope to resume sailing on June 10 with 8 days itineraries roundtrip from Dubrovnik until September 23. They will feature a new route stopping over in Greece (Corfu), Albania (Saranda, Vlore, Durres) and Montenegro (Bar) alongside a more classical itinerary including only Croatia and Montenegro calls at Mljet, Korcula, Sibenik, Trogir, Split, Hvar, Vis and Kotor.

As for bookings, Schmitter is optimistic: ‘People are really eager to travel again. On our first departures in June and July, we’ll have the same clientele as last year: French, Belgian, Swiss, German and Spanish passengers. During the summer, we hope to regain progressively our British and Scandinavians guests. And hopefully our US and Canadian ones.’

He also notes a strong correlation between vaccination progress and reservations: ‘This is very good news.  A lot of bookings that were postponed and gave rise to a credit voucher are rescheduled. But we have also gained new clients attracted by our smaller-sized ships and itineraries close to nature and culture,’ he added.

He said the company’s 22-passenger barges are equally successful.

‘Previously these were popular with Anglo-Saxon passengers and very little known by our French clientele. Now we have created shorter and all-inclusive cruises, which are filling quickly.’

The company will offer flexible booking until August 31, 2021.

Last year the Portuguese authorities impose a two-third capacity limit on board Douro sailings. For other destinations, Schmitter said there are no limits, ‘but we are strictly applying our health and safety protocols, developed in collaboration with Bureau Veritas, which are enhanced this year with all passengers required to be fully vaccinated or provide a negative PCR test less than 72 hours before sailing.

‘These measures will be evaluated and updated as public heath circumstances evolve,’ he concluded.