Disney Wish has new experiences for kids, tweens and teens 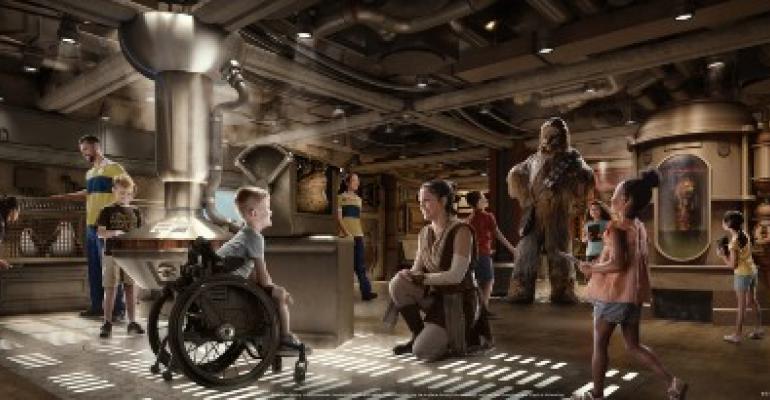 Creatures and characters of the Star Wars galaxy will take center stage at Star Wars: Cargo Bay in Oceaneer Club
With the addition of Star Wars: Cargo Bay, Mickey and Minnie Captain’s Deck and The Hideaway, Disney Wish will provide new experiences for children of all ages.

Rouding out Oceaneer Club, for ages 3 to 12, are new spaces Star Wars: Cargo Bay and Mickey and Minnie Captain’s Deck.

Creatures and characters of the Star Wars galaxy will take center stage at Star Wars: Cargo Bay, where kids learn to manage a mischievous menagerie, including a porg, Loth-cat, worrt and more. Throughout the cruise, they’ll use augmented reality-enabled datapads to track and study the creatures on a series of special assignments.

They'll also join the mission to deliver a pair of secret stowaways, Rey and Chewbacca, back to the Resistance.

Specially designed for the youngest sailors in the Oceaneer Club, Mickey and Minnie Captain’s Deck will be filled with maritime-themed physical and sensory-style games and activities, such as pipe slides and crawl-throughs, ship’s wheels, 'busy boxes' fashioned as ship controls and cushy life preserver seating areas.

When little cadets enter the space, they’ll get play time with Mickey Mouse and Minnie Mouse themselves. At select times throughout the cruise, the space will be open to little ones’ families for group play, and the toddlers from It’s a Small World Nursery will also get dedicated access to the club.

The signature experience will be Minnie’s Captain Academy,' a high-energy training session for kids to exercise with games, dancing and maritime 'drills' and to test their imagination during a series of  challenges.

Older kids will get to chill and play in their own Disney Wish hangouts. At Edge, ages 11 to 14 will have a bright, colorful hangout inspired by a New York City loft.

Edge will have an indoor solarium area with a sunny overhead skylight effect, carpet patterned with fresh grass and daisies, a back wall mural of a bright blue sky, and games inspired by a city park. Throughout, 'photo walls' will provide opportunities to capture cool, shareable vacation pics.

Teens 14 to 17 will have their own dedicated club at Vibe, a space inspired by a Parisian artists’ loft with classic architectural elements, vibrant neon signs and pop art.

A third club for tweens and teens

For the first time on a Disney ship, Disney Wish will feature a third club for tweens and teens: The Hideaway. This hangout will offer older kids and young adults a chill place to relax and listen to music in a setting with a dance floor and DJ booth for karaoke contests and dance competitions.

The Hideaway will be adorned in a vibrant color palette, retro-inspired design details, a stylized 'Hiya, pal' mural and disco ball lights. Adjacent to Vibe, this flexible venue can be opened to the teen club, closed off for tween activities and even reserved for passengers ages 18 to 20.

Tweens and teens will also have counselor-led programming, such as a new competition themed to the fan-favorite Walt Disney Animation Studios’ film 'The Emperor’s New Groove.' Plus, activities will extend into other areas of the ship, with special events for tweens and teens hosted in Hero Zone, Luna and elsewhere.

As previously announced, cruisers ages 6 months to 3 years will be cared for at It’s a Small World Nursery, where babysitting services will be provided. In this whimsical environment, the little ones can play games, make crafts, watch movies, read books and spend time with Disney friends under the expert care of Disney-trained counselors.

Disney Wish is scheduled to make its inaugural voyage from Port Canaveral on June 9, 2022.

Cruise is behind other industries in DEI, says RWS Entertainment's Stana
Oct 06, 2021