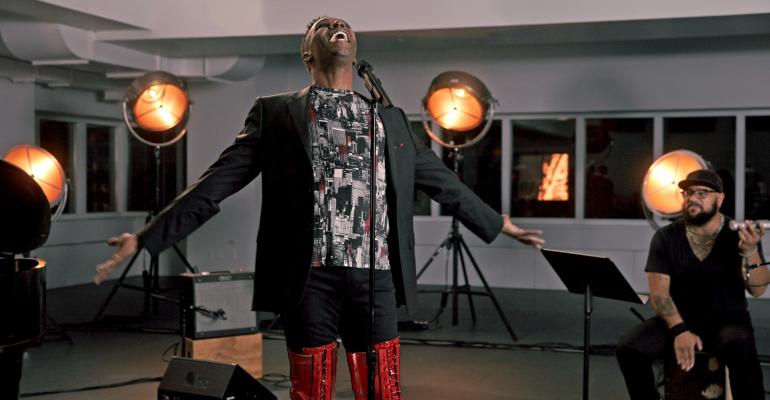 Alan Mingo will perform 'Land of Lola' from 'Kinky Boots' during NCL's 'Live From Broadway'
The debut 'Embark NCL Spotlight' episode, 'The Choir of Man — Live From London,' got more than half a million views during the first week it aired.

'While we haven’t been able to connect with our guests, cast and crew during this extraordinary time, we wanted to deliver our friends at home an intimate showcase of some of our top productions across our fleet, while also offering this marquee of talent a stage to share their musical gifts with viewers around the world,' said NCL's Richard Ambrose, SVP entertainment and cruise programming.

In addition to stellar performances, the public will get a front row seat to behind-the-scenes conversations with cast members about what it means to them to perform for the first time in many months.

Braxton will sing 'On the Sunny Side of the Street' from 'After Midnight' on Norwegian Escape, while Pope will perform Donna Summer’s 'Last Dance' featured in the Australian musical 'Velvet' on Norwegian Jewel and Norwegian Breakaway. Michael Fasano will sing 'Can’t Take My Eyes Off of You' from the Tony Award-winning 'Jersey Boys,' available on Norwegian Bliss.

And Mingo will perform 'Land of Lola' from the Tony Award-winning 'Kinky Boots,' on Norwegian Encore, NCL's newest ship. Mingo is best known for his award-winning performance as Lola in the Canadian and Broadway productions of 'Kinky Boots.' Other Broadway credits include 'The Little Mermaid' as Sebastian and 'Rent' as Tom Collins.

Mingo recently joined Ambrose for a Zoom chat with media.

'The pandemic has been tragic for the cruise industry but it's catastrophic for the live entertainment industry — Broadway and the West End,' Ambrose explained, so NCL's support for performers is appreciated.

A 90-day lead time is expected before cruises restart, according to Ambrose, who said NCL is still juggling which ships will enter service first. So the casts are not currently rehearsing but the shows are in pre-production while adhering to new rules to keep everyone safe.

NCL has studios in Tampa where the shows for six to eight ships are normally rehearsing. During the pandemic, those facilities were built out to more than 100,000 square feet. There are eight studios, each the size of the largest stage on the ships, which is actually on Norwegian Pearl, Gem and Jade.

'That is impressive,' Mingo said, to see the 'massive studios with all the other shows in production.'

Each show's cast will live and work in a separate bubble, with regular COVID-19 testing.

Hope to start rehearsals in January

'The goal is to start rehearsing sometime in January for the ships that will go out,' Ambrose said. Since the ships will be empty, casts also will be able to rehearse on board. And that really helps for a show like 'Kinky Boots,' with its many backstage elements including props and costumes.

When Mingo first saw the Norwegian Encore theater, he was 'amazed,' adding that the backstage technicians are each 'doing the job of four people in making some magic happen.'

Asked if he gets hazard pay for wearing kinky boots with six-inch heels on a moving ship, Mango said no but he maintained motion 'hasn't been an issue. The ship is so big, you rarely feel it move.'

Cruise ship audiences are different, the performer said, adding that he loves talking with people after they see the show. Broadway audiences go to the theater as a premeditated choice, while on cruise ships, 'there are so many choices. You can go anywhere you want. Sometimes people happen into the theater and see the show and they love it,' [raving] "Oh my god! I had no idea." When they see the quality, having that experience for them is quite exciting.'

After the casts go to sea, they'll be tested for COVID weekly with temperature checks twice a day. 'They will have access to the ship but we will keep them safe,' Ambrose said. Backstage crew will be masked and some will have shields, part of what he called a 'very robust system.'

There will be more performances of each show, before smaller audiences — '350 to 400 people in the theater instead of 1,000,' Ambrose said.

As previously reported, even the more intimate acts like The Cavern Club for Beatles tribute shows and Syd Norman's Pour House for live rock 'n' roll will be available, but without intermingling the performers and the audience.

The show must go on

Once NCL resumes sailing, 'Guests will have the full entertainment experience, 100% as before,' Ambrose pledged. 'NCL is so known for entertainment. The show must go on.'

However, it will take four to six weeks to get everything running again because of the sheer logistics.

'I'm excited to get back and perform in front of a live audience,' Mingo said. The last months have been difficult because 'We also train while we perform and the pandemic has shot that down.'

'Live From Broadway' will stream at www.ncl.com/embark at 9 p.m. ET, Dec. 17, before being made available on demand. 'The Choir of Man — Live From London' is also available there, on demand.