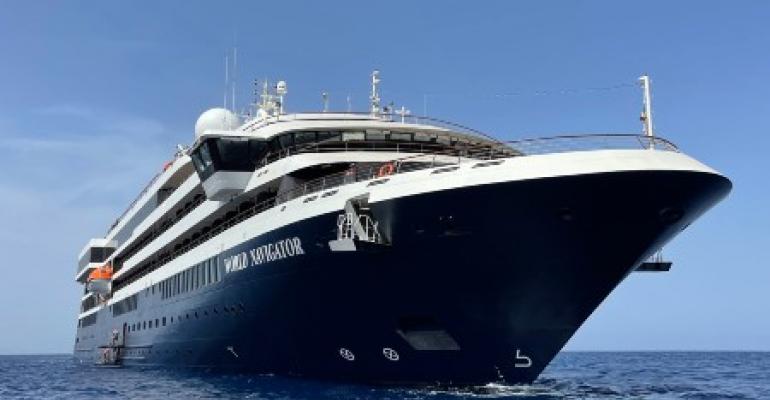 The passenger, traveling companions and first contacts were isolated, and the others tested negative.

World Navigator returned to Heraklion, its prior port, where the passenger was disembarked.

'After satisfying the Greek port authority that World Navigator‘s health and safety protocols had successfully prevented any transmission, all guests were cleared to independently enjoy an evening in Heraklion,' Atlas Ocean Voyages said in a statement.

Having missed only one day of a planned two-day stop at Alexandria, Atlas Ocean Voyages quickly arranged for passengers to continue their trip by chartering planes to take them to Cairo. There, on Thursday, they will be able to go on the Egypt tours they'd booked, conclude the full Atlas experience as planned — a celebration dinner and party on the Giza Plateau overlooking the pyramids, which will be illuminated into the evening exclusively for World Navigator — and take their original flights home on Friday.

World Navigator had embarked Aug. 4 in Piraeus, carrying 104 passengers on its inaugural voyage, a nine-night Greek Isles and Egypt itinerary.

Passengers booked on the subsequent Aug. 13 cruise will fly to Cairo as scheduled and take Atlas’ private charter flight to embark the ship at Heraklion for their seven-night voyage, which will conclude at Piraeus.

'While the ship remains in Heraklion, Egypt really wanted us to come, but the timing would have made our guests miss their tours,' an Atlas spokesman told Seatrade Cruise News. As it turned out, the line found a way to deliver Egypt as promised and, the spokesman added: 'We feel that our health and safety protocols worked to prevent any on-board transmission.'