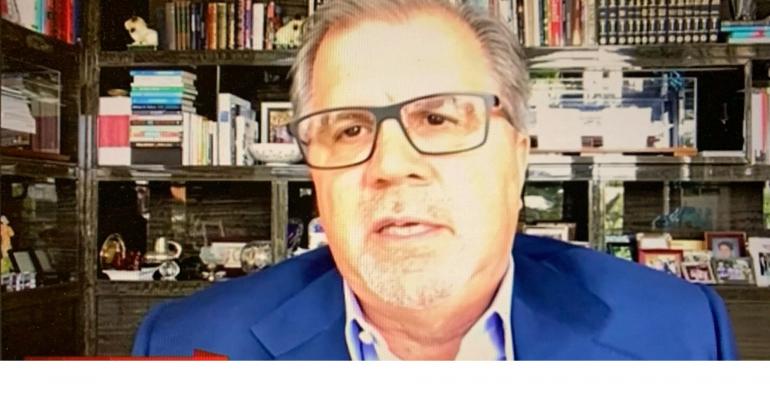 It's unclear if the 'numerous and onerous' items spelled out in the new guidance apply to vaccinated voyages as well, Frank Del Rio said

Most of all, he stressed the power of Norwegian Cruise Line Holdings' commitment to 100% crew and passenger vaccination on top of the Healthy Sail Panel's protocols as an 'iron-clad' approach.

It's unclear, Del Rio said Thursday, if the 'numerous and onerous' items spelled out in the Centers for Disease Control and Prevention's new guidance apply to vaccinated voyages as well.

In the agency's highly detailed and prescriptive operations manual for simulated and restricted voyages, one mask-related point states: 'While the order permits temporarily removing a mask for brief periods of time while eating or drinking, removal of the mask for extended meal service or beverage consumption would constitute a violation of this order.'

Del Rio considers that 'preposterous' for a fully vaccinated ship.

'In between bites of your meal and sips of your drink, you have to put on and take off masks. So nobody should order soup, because your mask may get sloppy,' he said.

'It's not in the spirit of where the country is headed, where President Biden wants to open the country. Seventy percent of Americans will be vaccinated by the beginning of the third quarter. We hope we're reading it wrong. We hope there'll be clarifications. We hope some of these more onerous requirements in Phase 2B only apply to cruises, ships, brands that are not going to vaccinate ...'

And when it comes to vaccination, Del Rio can't fathom CDC's call for 98% of crew and 95% of passengers in order to bypass trial voyages. He thinks it should be 100%.

'I don't understand 98%. You have a big ship, You have 1,800 crew members on board, and you're going to vaccinate 1,764 of them, but not 36? What a loophole to allow potential COVID to be introduced in the crew area.

'One hundred percent, at least in the beginning, I believe, should be the model. If the CDC and the rest of the industry wants to go in another direction, great. We want to go 100%,' Del Rio stressed.

In any case, NCLH doesn't plan any trial voyages because it's going the fully vaccinated route, and everywhere. That applies to all ships and geographies, even outside the US.

In contrast, some major lines with vaccination mandates are taking one ship and geography at a time.

No chance now to put additional ships out by July

There's no opportunity to put additional vessels out by July, Del Rio told analysts during today's business update, because it takes 90 days to start up a ship. When NCLH came out with its full vaccination plan and asked CDC to waive the conditional sailing order on April 6, there was time to get ships in service by July. Now, a month later, CDC hasn't addressed that so it's not going to be possible. As a result, the company is focused on starting up its first six ships outside the US in July, August and September.

Why cruising is being singled out from airlines and other businesses leaves Del Rio 'perplexed, flabbergasted and outraged ... We're willing to vaccinate every single person on a cruise ship. There isn't another venue on Earth, not a school, not a factory, not your office or apartment building, much less an entertainment venue like a casino, hotel or resort can make that claim. We will be the safest place on earth by definition.'

On top of the vaccination mandate are the Health Sail Panel protocols.

'That one-two punch is unbeatable,' Del Rio asserted. 'No one else has it, yet, the CDC continues continues to treat us differently, unfairly.' He added it's not like the CDC has managed the virus so well in the US, which ranks No. 1 for deaths and hospitalizations.

'Yet they pick on the cruise industry in the extreme.'

The NCLH chief expressed his hope that the twice-weekly calls with CDC will improve the situation, as he said happened with Phase 2A. During this afternoon's call, his company plans to communicate that the newly published Phase 2B and 2C are 'unacceptable in many areas.'

As for Gov. Ron DeSantis's vaccine passport ban —  his April 2 executive order states that 'Businesses in Florida are prohibited from requiring patrons or customers to provide any documentation certifying COVID-19 vaccination or post-transmission recovery to gain access to, entry upon or service from the business' — it's a classic state-federal legal conflict, Del Rio said.

NCLH is talking with the governor's office and Del Rio said lawyers believe federal takes precedence here. But he hopes it doesn't become a legal or political football.

'There are other states we do operate from, and we can operate from the Caribbean with ships that would have sailed from Florida. We certainly hope it doesn't come to that. Everyone wants to operate out of Florida. It's a very lucrative market. It's a close drive market. But it's an issue. We can't ignore it. We hope everyone in pushing in the same direction. We want to resume cruising in the safest possible manner.'