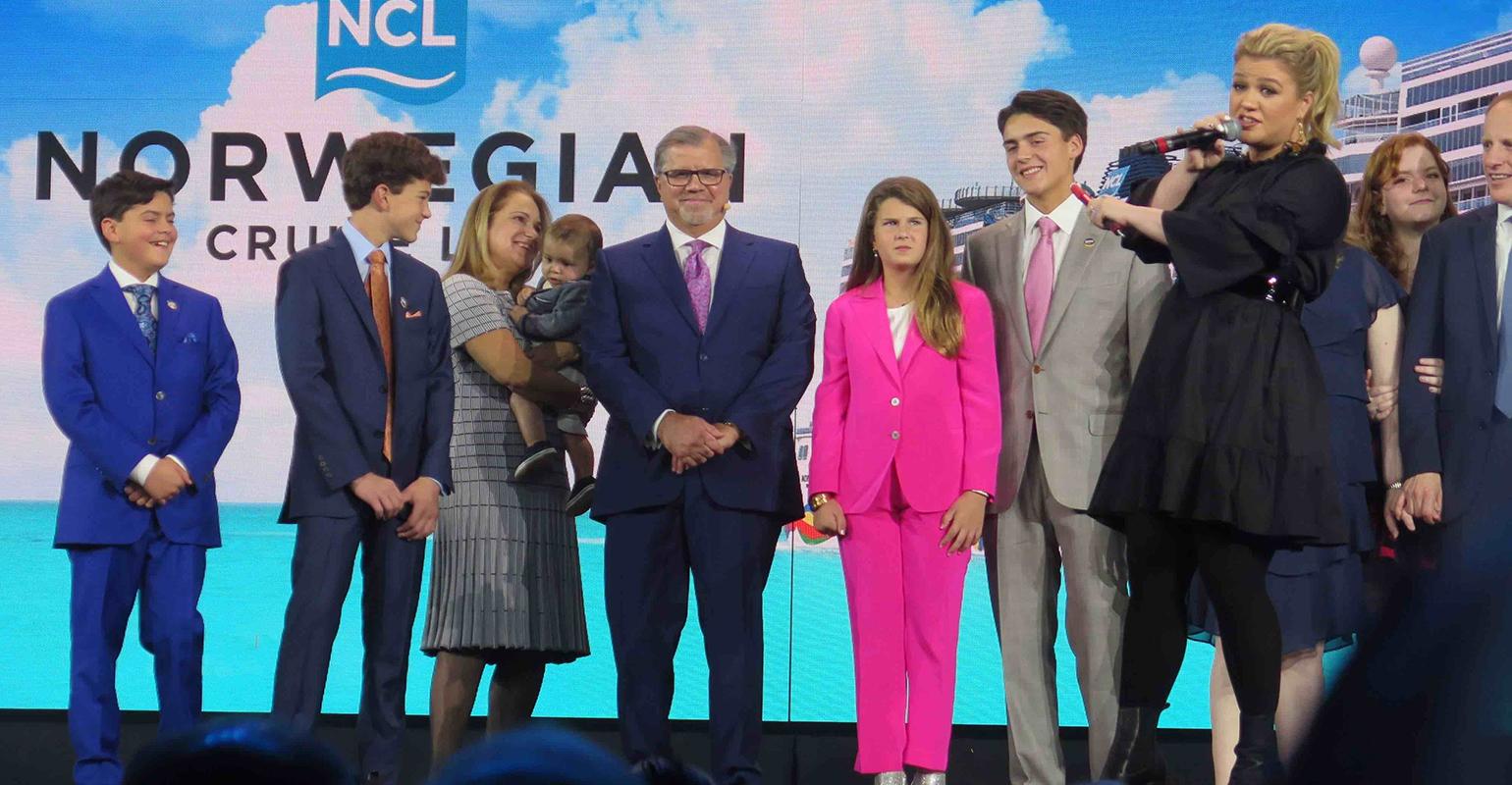 Andy Stuart races in with the Champagne

Clarkson waved a red wand and the bubbly smashed against the hull, with streamers raining down on the audience. Moments before, NCL President and CEO Andy Stuart had burst onto the stage in a red race car with the requisite Nebuchadnezzar of Champagne.

Radio personality Elvis Duran, godfather of Norwegian Encore’s earlier sister ship Norwegian Bliss, served as emcee for the festivities, at one point strutting out in thigh-high sparkly red boots. This followed a snippet from ‘Kinky Boots,’ the Tony Award-winning show that leads the entertainment on the new ship.

Another Norwegian Encore act, Choir of Man, opened the festivities, and Clarkson anchored the evening by performing her greatest hits. Actors from ‘Kinky Boots’ danced in the aisles and tossed colorful beach balls into the crowd.

The naming festivities were particularly emotional as Andy Stuart said farewell after a 31-year career at Norwegian. ‘He’s a leader and definitely leaving a legacy that will last for decades,’ said Sommer, his successor.

‘Norwegian Encorse is the last ship in the Breakaway Plus class and, boy. what a closing act,’ Stuart said. He thanked Del Rio for his trust, leadership and generosity, the shoreside and shipboard teams, the media, travel partners — getting a huge cheer, his wife Allison and Sommer.

And he gave Sommer a huge endorsement, adding: ‘He’s a guy who can do more in a day than most human beings can do in a month.’

For his part, Del Rio called Stuart an innovator and fearless leader and said: ‘Thank you, Andy. We’re all going to miss you. While, at the same time, I’m 100% confident — make that 200% — that Harry is the right person for the job. He is the single smartest individual I have ever met.’

Del Rio went on to credit a long list of people who contributed to Norwegian Encore, including two young grandsons who thought of the first racetrack at sea (for Norwegian Joy; it was progressivly expanded on Bliss and, now, on Encore).

Del Rio also expressed appreciation to travel agents for making Encore ‘the best booked ship, at the best prices, introduced in the Caribbean in Norwegian’s history.’