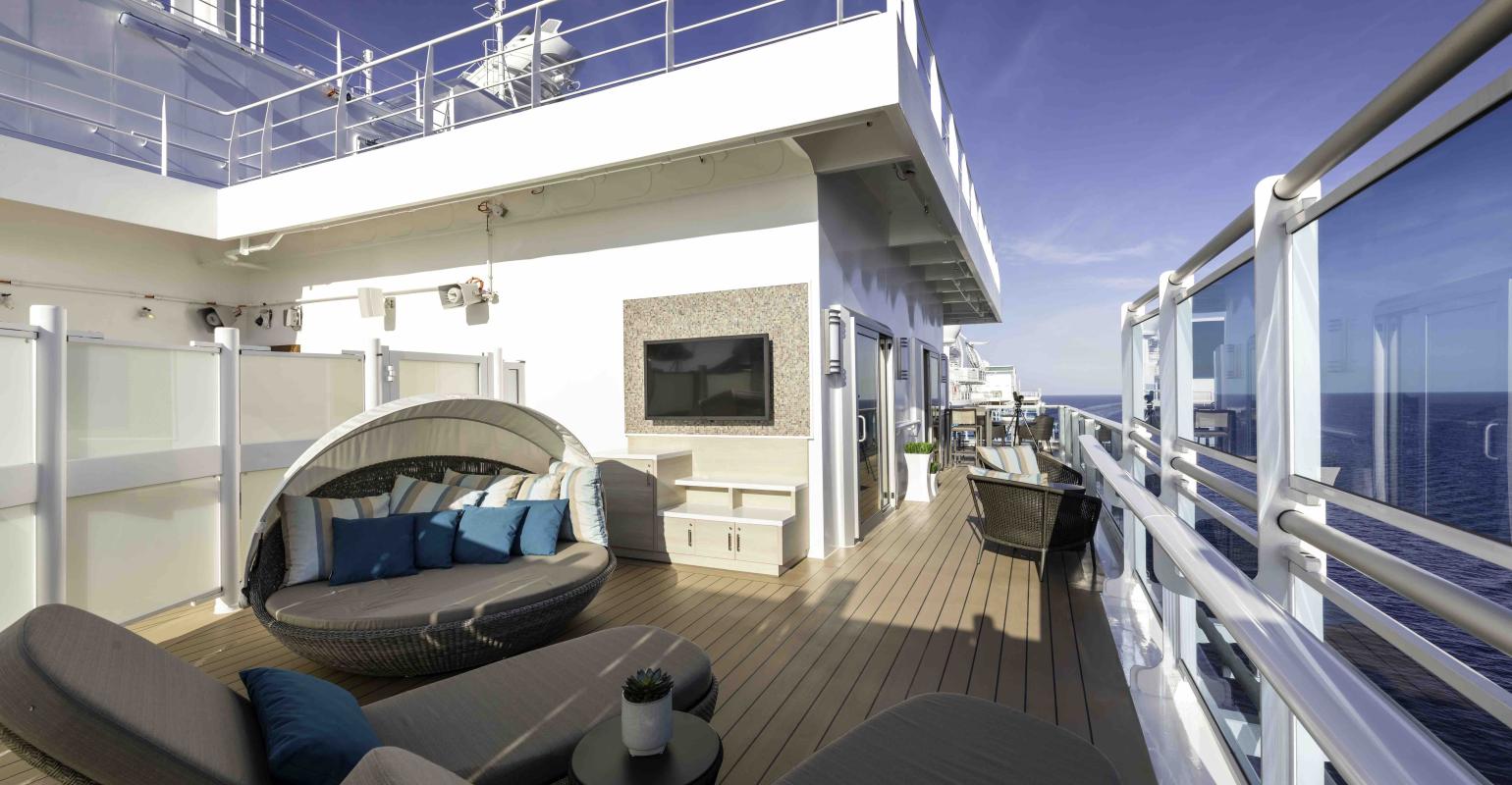 The two Sky Suites on Sky Princess sport what the line says are the largest balconies at sea PHOTO: ©Christopher Ison/Princess Cruises
Princess Cruises’ new 3,660-passenger Sky Princess — the fourth in the line’s Royal class — features a familiar layout with a lighter color palette and a few surprises.

The 143,700gt ship is departing on its first revenue cruise Oct. 20 from Athens to Barcelona. After an Oct. 15 delivery from Fincantieri’s shipyard in Monfalcone, Sky Princess sailed a shakedown cruise from Trieste carrying media and industry partners from Trieste.

Princess executives showcased new Sky Princess features, notably the two new Sky Suites perched on Deck 18 above the main pool. Each Sky Suite measures about 1,873 square feet, with two bedrooms and two bathrooms, as well as what are billed as the largest balconies at sea — the starboard balcony stretches for 1,000 square feet while the port terrace is 947 square feet, said Rai Caluori, EVP guest experience and product development.

Both face the jumbo LED movie screen, and Sky Suites guests can even choose from a selection of films to watch from their balconies. The Sky Suites also feature extra perks, like a Suite Experience Manager to help passengers customize their experience with anything from a private musician to a stargazing session.

Princess executives also revealed the line is developing a new puppet show in partnership with the Jim Henson Co., creator of the Muppets, and John Tartaglia, the Tony-nominated actor and puppeteer. Caluori said ‘Jim Henson’s Inspired Silliness’ will be presented in the Vista Lounge by year’s end and feature shows for all ages as well as an adult, late-night version. Princess also plans to offer puppet-making classes.

The puppet shows will be offered on the next ship in the class, Enchanted Princess, entering service in June 2020.

Overall, Caluori said Sky Princess features a more contemporary design with a lighter color palette and a more modern feel. Simple things updated include the signage and the handrails on the stateroom balconies — they’re now a composite material instead of teak. While some might not appreciate that change, Caluori said the rails now require less maintenance and give the ship a more modern appearance.

Also, Sky Princess is the first ship purpose-built with the MedallionClass features, entailing 4m feet of cable and 8,000 hockey puck-like sensors architecturally integrated throughout the vessel. The other ships were all retrofitted.

Speedy, dependable MedallionNet Wi-Fi is part of that.

‘Pervasiveness of connectivity is very important. We set out at the outset to dramatically change it to make it affordable and make it accessible,' Caluori said. 'A lot of guests say they want to disconnect from the Internet, but they don’t really. This allows you to stay connected at land-like speeds at a very easy and affordable way.’