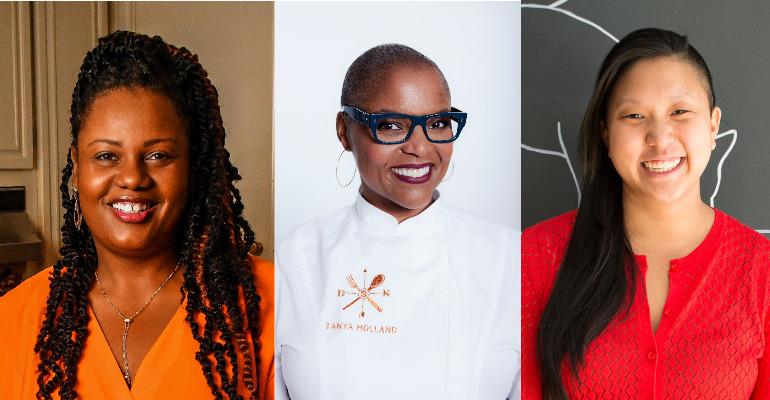 ‘As the Official Cruise Line of the James Beard Foundation, our guests are able to meet culinary superstars and sample dishes created by some of the world’s best chefs,’ stated Stijn Creupelandt, VP hotel operations and product development, Windstar Cruises.

‘Having a long-term partnership with such a prestigious and respected culinary organisation lets our customers know that we are devoted to a unique travel-culinary programme, one which hand-picks acclaimed culinary experts to share their knowledge of cuisines of the world with travellers and showcases exclusive recipes on sailings across Windstar’s fleet of six elegant yachts.’

The voyages include two on-board cooking demonstrations plus four dishes from a JBF chef at a hosted dinner with wine pairings. The three will also lead a market tour, gathering fresh and local ingredients for dishes served on board – port- and health restrictions permitting – and create recipes for menus across all Windstar cruises. These add to a growing list of JBF-affiliated chefs’ special menu items available fleet-wide.

Atlanta’s Booker combines her Southern culinary heritage, a belief in healthy and seasonal foods, and her classic training at Paris’ Le Cordon Bleu College of Culinary Arts to create a style of cuisine she calls: ‘Modern Southern Healthy Cuisine.’

She is the Culinary Explorer for the Georgia Department of Tourism and Travel and is the founder of Southern Divas of the New South TM Dinner Series.

Booker is an Impact Fellow with the JBF and currently sits on the foundation’s Food Waste Advisory Council.

She competed on the 15th season of Top Chef on Bravo and was the host and soul food expert on Food Network’s Melting Pot. A public speaker and lecturer, Holland was appointed Culinary Diplomat by the US' Foreign Service Department for tours in Kazakhstan and Mexico, and taught classes in France for gastronomic travelers.

She frequently comments on inclusion and equity in the hospitality industry, and is a frequent contributor to the JBF as a writer and chef.

A Boston native and Cornell graduate, Li is an Eater Young Gun, Zagat 30 Under 30 and Forbes 30 Under 30 winner. Family-run Chinese restaurant Mei Mei was opened by Li in Boston in 2013, and since then, the chef has worked to drive ethical sourcing and fair and transparent employment practices within hospitality.

She founded and served several organisations aimed at helping those in need during the pandemic and advocated for restaurants by creating tools and resources to support businesses of all sizes to develop sustainably and equitably.

Booker will sail from Aruba to Panama onboard Wind Surf as part of the vessel’s ‘In the Wake of the Spanish Armadas’ itinerary departing February 6. The eight-day voyage includes two stops in Colombia, a day in Panama’s Bocas del Toro and time in Costa Rica’s Puerto Limon. The cruise concludes with a Panama Canal crossing before arriving in Colón, Panama.

The 10-day ‘West Coast Epicurean Extravaganza’ onboard Star Breeze features Holland. Departing May 10 and sailing from San Diego to Vancouver, the itinerary comprises West Coast ports of call and cuisine. Small-ship only ports such as Portland – accessed via the Columbia River – alternate with stops in the grand dames of Seattle, San Francisco and San Diego. Passengers will have the chance to experience Californina’s Santa Barbara and Canada’s Victoria.