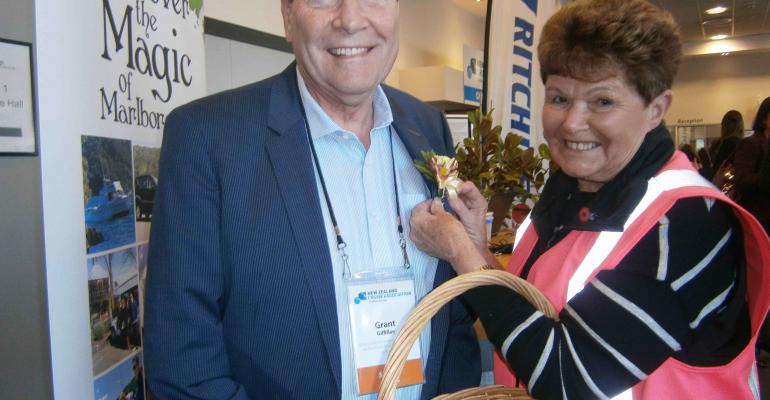 Grant Gilfillan with a Picton Flower Lady at the opening session

Appeal for Ritz-Carlton and Virgin Voyages

Gilfillan, who is also ceo of the Port Authority of New South Wales, said there is tremendous interest in the region by new players, including The Ritz-Carlton Yacht Collection and Virgin Voyages.

He said cooperation between Australia and New Zealand is vital as they are often part of the same itinerary.

However, he said, the value of cruising to the economy of both countries is still not understood by many politicians.

‘This will involve robust business analysis before investment and winning over governments where long-standing scepticism about the value of cruise has hindered investment.’

He said running the port in Sydney for 10 years has given him much to think about regarding cruising.

‘We are determined to show leadership and to work with all parts of the industry and particularly with our friends in New Zealand.’

Gilfillan was met by a Picton Flower Lady when he arrived at the Marlborough Convention Centre for the opening session of NZCA 2018.

The Flower Ladies of Picton are volunteers who famously make corsages for every ship’s arrival in Picton, the port for Blenheim, and they were a hit with the delegates.