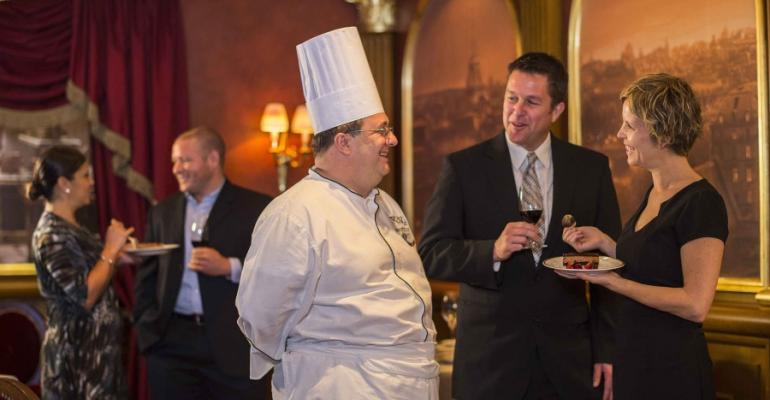 People are giving cruises more five-star ratings than before, with the biggest improvements in scores related to dining and entertainment, according to Cruiseline.com.

In other findings, Disney is the top-rated line, closely trailed by Celebrity, and the most popular cruise ports are in the Eastern Mediterranean, Australia/New Zealand and the Baltic.

These are some of the key verdicts from a mountain of reviews at Cruiseline.com, a consumer site that guarantees the authenticity its user reviews. The site recently passed its 100,000th review milestone.

What caused this huge increase? The biggest improvements the site observed in scores have been from entertainment and dining, which Cruiseline.com surmised is likely due to the increase in Broadway-style productions like 'Rock of Ages' on Norwegian Cruise Line and 'Chicago' on Royal Caribbean, along with branded food experiences by celebrity chefs like Bayamo by José Garces on Norwegian, Jamie's Italian by Jamie Oliver on Royal Caribbean and Guy’s Burgers by Guy Fieri on Carnival.

Looking at overall average review scores from the past decade, Disney remains the undisputed cruise leader, according to Cruiseline.com. While the line’s prices are easily twice as high as its competitors and its four-ship fleet is a fraction of the size of other mainstream lines, Disney delivers a superior experience based on the ratings, closely followed by Celebrity.

The average scores of Princess, Royal Caribbean, Carnival and Holland America have not fluctuated much, but Norwegian has upped its game after trailing significantly in 2006 while Celebrity is quickly chasing Disney’s top spot.

The data also show that fundamentals matter most to cruisers. On every Cruiseline.com review, travelers are given the chance to rate and comment on specific aspects of their cruise. While lines tout their new on-board technologies, activities and entertainment, on average, reviewers spend more time writing about basics—dining, cabins and service.

Reviewers spend an average of 139 words writing about cabins and food, 35% more than service and entertainment (103 words) and a whopping 2.3 times more than on-board activities and ship quality.

The Cruiseline.com data also show that average review scores from first-time cruisers are about 10% higher than experienced passengers.

The site found most new cruisers are impressed by the service, entertainment, dining and activities. But when they go on their second, third or more cruises, their expectations are much higher so they’re harder to impress.

When sailing to the Caribbean, cruisers give slightly more favorable reviews during shoulder season (late spring and early fall). The best rated cruises were in May and September, right before and after kids are off for summer vacation when ships tend to be less crowded and prices are cheaper. Reviews are generally the lowest in the holiday months of November and December when prices are higher and ships are far more crowded.

Cruisers sailing in Europe generally had better experiences in the summer months, with May in particular receiving the highest average review score. Not only is the weather better then, the major cruise lines generally keep their newest and best ships in Europe from April to October and redeploy them to the Caribbean for the winter.

Cruiseline.com launched in December 2012 as an independent guide to cruises, but its collection of cruise reviews goes back to 2006. The site has more than 104,000 cruise reviews and 92,000 port reviews to date.