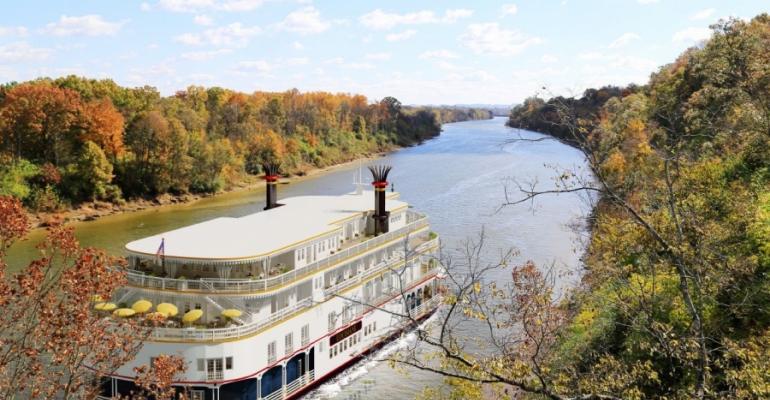 These are among the points of distinction of the newest river operator to burst on the scene in the US. French America Line plans to launch its boutique vessel with French flair on the Mississippi River in late August.

'Chic' and 'upscale' are words travel industry veteran Christopher Kyte, the company's founder and chairman, used to describe the ambience of the 150-passenger Louisiane.

'It's a different product, delivering a more boutique, more refined, more sophisticated style of river cruising than we've ever had in this country,' Kyte told Seatrade Cruise News.

'It's a bit fresher and more innovative. We're getting away from the Mark Twain impersonator, straw-hat routine.'

Louisiane is the former Columbia Queen, which French America Line acquired from Xanterra for an undisclosed price. It is the last vessel built by the Delta Queen Steamboat Co., and has been laid up since 2008 in Portland, Oregon. Kyte said its condition is fine, but a multimillion-dollar, 45-day refurbishment to restyle the interiors is planned at a Louisiana shipyard.

Louisiane will emerge with venues like the sophisticated Bar Royale for cocktails and aperitifs, and The French Quarter Lounge for a flute of Champagne to accompany soft jazz. The Orleans Room, with glittering chandeliers, will serve Southern and Continental cuisine at open-seating breakfast, lunch and dinner, while the brasserie-like Verandah provides casual indoor-outdoor dining. The Currents Spa will feature scented oil treatments. Illuminators, on-board history experts, will share insights into the regions visited.

Kyte, whose California-based Uncommon Journeys has a long record of deluxe ocean cruise, river and rail programs, established French America Line in Greater New Orleans. The noted Southern chef Regina Charboneau, who has worked with Kyte at Uncommon Journeys and when he was a founding executive of the American Queen Steamboat Co., is designing the cuisine.

Ken Grigsby, with a background in banking, hotel management and marketing, is ceo, and Tom Markwell, recently with Haimark and previously with Pandaw River Cruises North America, is president. Director Kevin Griffin is founder of The Cruise People Ltd. in London.

Louisiane will sail through the American Heartland, from the upper Mississippi to the deep South, along the Ohio and Tennessee rivers and skirting the Gulf of Mexico between New Orleans and Pensacola, Florida. There will be sampler cruises of up to five days, classic cruise-tours of six to eight days, grand tours of nine days or longer and collector's tours of varied lengths.

For example, a rare journey along the Red River, round-trip New Orleans, is a nine-day collector's voyage. This 'Red River Holiday' calls at Louisiana's Baton Rouge, Alexandria, Natchitoches and Freeport. Two December departures are offered, timed to the impressive riverbank light displays of Natchitoches and other Southern holiday festivities.

A 'Jewels of the Heartland' cruise-tour, 10 days from St. Louis to St. Paul, Minnesota, starts with a deluxe hotel overnight in Chicago (on Sept. 16 at the Palmer House Hilton, followed by a private Vista-Dome Streamliner train, the Louisiane Limited, journey to St. Louis) or in St. Louis (Sept. 30 at the AAA Four-Diamond The Doubletree at Union Station). The cruise from St. Louis includes Hannibal, Missouri; Davenport and Dubuque, Iowa; La Crosse, Wisconsin; and Red Wing, Minnesota.

Per diems average about $400 to $600, depending on cabin category. Rates include a pre- or post-cruise hotel night at plush, landmark properties like The Peabody Hotel in Memphis, the Seelbach Hotel in Louisville and the Hotel Monteleone in New Orleans. Also included are custom-crafted shore excursions in each port, free-flowing spirits, wines and beers, illy coffee, 24-hour room service, Wi-Fi and, in all accommodations, iPads pre-loaded with e-books, shore excursions, daily programs and menus.

A dinner menu by chef Charboneau might include entrees like pan-fried quail with smoked bacon, braised pork shoulder with potato gnocchi, prime rib of beef and poached salmon. Afternoon tea is French-inspired, with petit fours and madeleines.

Louisiane, Kyte said, will be the 'ne plus ultra of riverboats in America.'