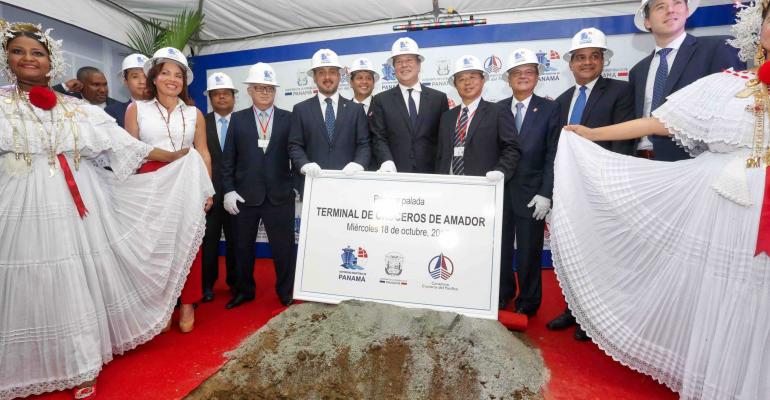 The groundbreaking ceremony kicks off an 18-month construction period

Panama broke ground Wednesday for its $166m cruise terminal at Panama City's Amador Causeway, near the Pacific entrance to the Panama Canal.

The development of this new homeport on Perico Island is driven by the national government through the Panama Maritime Authority.

It will allow many thousands of passengers to embark on cruises from Panama, according to Maritime Authority administrator Jorge Barakat Pitty.

With this port officials also hope ships transiting the Canal will dock at Panama City. The 2017/18 cruise season sees around 250 vessels making transits.

'This means more than 600,000 tourists passing through the Canal without having the opportunity to make a stop in Panama City,' said Panama President Juan Carlos Varela Rodríguez, who participated in the groundbreaking.

The facility will have two berths that can simultaneously handle a pair of ships carrying up to 5,000 passengers each. The design and construction were awarded in a competitive bidding process to the Cruceros del Pacífico consortium consisting of the Belgian company Jan De Nul and Beijing-based China Harbour Engineering Co. (CHEC). Jan de Nul was one of the companies that participated in the expansion works of the Canal, inaugurated in 2016, and CHEC has been present in Panama for several years.

Amador Cruise Terminal is expected to boost Panama's maritime business while also diversifying the tourism sector by serving as a gateway for cruising.

Varela welcomed the positive impact on the nation's economy.

The terminal will be key to economic development, generating 1,000 direct jobs and 1,800 indirect jobs during its construction phase, as well as permanent jobs for the operation of the terminal, the president said.

The construction begins as Panama celebrates the centenary of its world-leading international ship registry.

'With the same level of excellence Panamanians will manage this terminal and make it one of the most visited in the world, always maintaining the highest standards of quality and safety,' Varela said.

The Amador Cruise Terminal is the first government project that will be executed by a Chinese company in Panama since the establishment of diplomatic relations between the two nations, said Wang Bo, a consortium representative for CHEC. According to Wang, the works will be made with 'advanced technology and [be] environment-friendly.'

Completion is scheduled in 18 months.