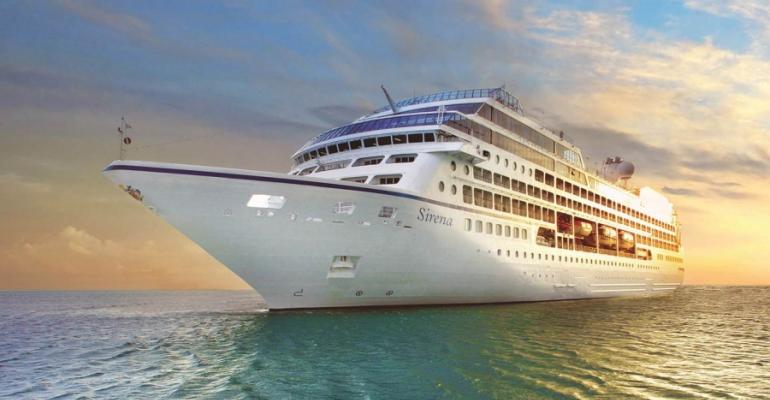 Sirena, newest addition to the fleet, will spend most of 2017 in the Mediterranean before heading to the Panama Canal, Mexican Riviera, South Pacific and Australia

Oceania Cruises is charting seven ports never visited by the line among more than 370 destinations in its just-released summer 2017 and winter 2017/18 programs.

For bookings made by Sept. 30, 2016, travelers get OLife Choice perks: free, unlimited Internet and a selection of one additional amenity. The choices are free shore excursions, free unlimited house beverage package or a shipboard credit.

Oceania's newest addition, Sirena, will spend most of 2017 in the Mediterranean. Then the ship will go as far north as Dublin on a 12-day Lisbon to Bilbao voyage before heading to the Panama Canal, Mexican Riviera, South Pacific and Australia.

Regatta will chart Alaska with seven- to 11-day cruises in summer 2017. After transiting the Panama Canal, the ship will operate South America voyages including a 21-day Patagonia cruise. Other highlights are a 20-day voyage focused on Chile's fjords, islands and glaciers and a 35-day Americas route with destinations along the Mexican Riviera, in Caribbean and on the Amazon River.

The first half of 2017 and 2018, Insignia will sail its fifth 'Around the World in 180 Days' voyage. Eight segments are available, including 28 days from Civitavecchia (Rome) to Montréal and 20 days from Miami to Reykjavik, Iceland, via Greenland.

Northern Europe is the summer 2017 home for Nautica, with a touch of the Mediterranean included, too. One highlight is the 20-day 'Trail of the Vikings' voyage, round-trip London, with stops in Greenland and Iceland. Later in the year Nautica will journey to Africa and Asia on 15- to 30-day trips, beginning with a 30-day cruise from Dubai to Cape Town. A featured journey is the 30-day 'Indian Ocean Jubilee,' a holiday voyage from Cape Town to Singapore.

Marina spends summer and autumn in Europe, with a blend of Mediterranean sailings. An 11-day round-trip from London sails to the northern reaches of Norway. The ship will spend winter in the Caribbean on seven- to 12-day cruises.

Riviera will explore the Mediterranean on seven- to 12-day voyages. Highlights include the eight-day 'Cosmopolitan Collage,' traversing the French and Italian coastline and the 11-day, Barcelona-to-Venice, 'Fountains to Fortresses' voyage. Riviera will spend the winter sailing throughout the Caribbean.

Select Oceania voyages to Asia and Africa offer the option of a free three-night pre- or post-cruise land tour. Examples are 'Beijing & the Great Wall,' to some of China's top historical sites; 'Winelands & Wildlife,' from Cape Town; and 'Roman Wonders,' exploring Rome and Vatican City.