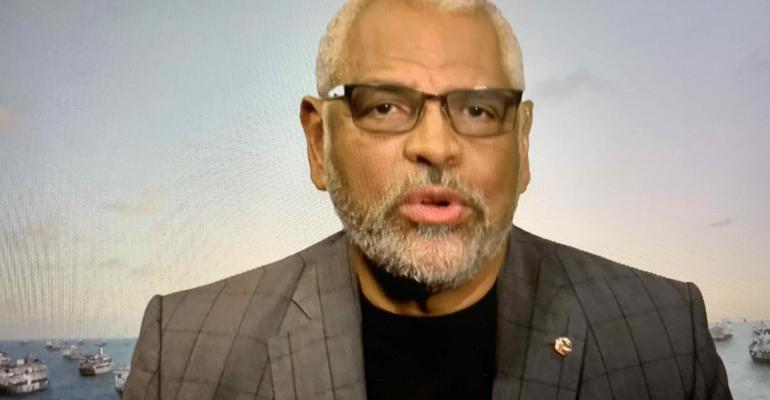 'We've got plenty of demand to fill [25 ships] once things are resumed,' Arnold Donald said

Carnival Corp. & plc needs 25 ships, or about one-quarter of its fleet, sailing at full occupancy to break even.

'We've got plenty of demand to fill that level of volume once things are resumed,' President and CEO Arnold Donald said during a business update Friday that also predicted Italy could be the next to restart cruises, following Germany, while there's no timeline for Asia or the United States.

Generally, the break-even occupancy for any Carnival ship is in the 30% to 50% range, depending its size, according to CFO David Bernstein.

Based on actual 2019 numbers, Carnival would need to operate about 15 ships to be cash-flow positive. The company's top 15 ships generate 30% to 31% of company cash flow, he said.

Elaborating further, to cover costs for the rest of the ships in lay-up and all shoreside sales, general and administrative costs, Bernstein estimated Carnival would need to operate 25 ships to be cash-flow break even.

Also, if Carnival were fielding just 25 ships, it would not be spending as much on SG&A as in 2019.

Donald is 'very encouraged' by current bookings. Some are made with future cruise credits but most (60% during the first three weeks of June) are new cash bookings and some are from people new to cruising.

Nearly two-thirds of the company's customers globally — almost 8m — are repeat customers, and Carnival has an active database of more than 40m. Customers sail every two-plus years on average.

'We expect demand to be more than adequate to fill ships in a staggered restart,' Donald summed up.

Germany starting, Italy may be next

As announced yesterday, cruises will resume in Germany for AIDA, on a limited basis, in August. In the first day of sales, AIDA took more than 1,000 bookings.

Donald indicated Italy may be the next to restart, but he had no guess for Asia and noted the US Centers for Disease Control and Prevention are still focused on crew care under the no-sail order and haven't begun to consider passenger service.

In terms of booked position, AIDA and Costa in Europe are ahead of Carnival's other brands, on a relative basis. As for Costa Asia, the Chinese market characteristically books last-minute.

'Europe is ahead and China is probably a little bit behind,' Bernstein said. 'Everybody else is in a similar booked position.'

According to Donald, all the other Carnival brands — including Princess Cruises, which was in the international spotlight for COVID-19 early on — are trending the same.

He added that no cruise industry brands have hit the trough in demand experienced during the 2012-2013 stint of bad news.

Ships can resume service in a 30-day window

Once countries give the OK to resume sailing, ships could start up within a 30-day window, Donald said, subject to coordinating with the destinations and getting the crew back.