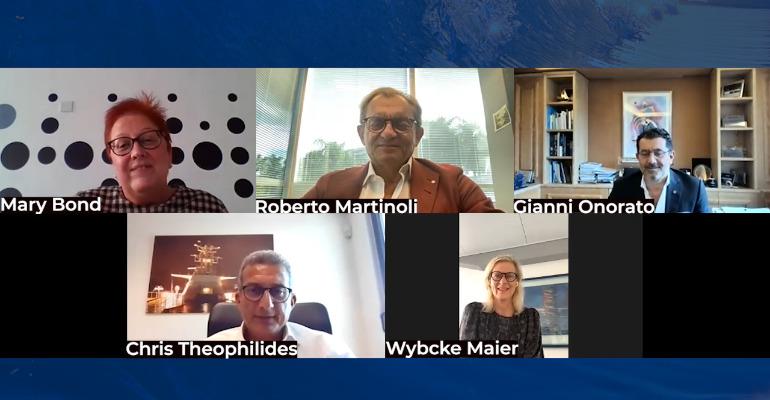 Cruise line execs agreed there remain operational challenges posed by different guidelines between countries and ports
Strong bookings for next year, an urgent need for unified protocols and greater effort at publicising progress made by cruise lines to protect the environment were among the key topics in the ‘State of the European Cruise Industry CEO Spotlight' at Seatrade Cruise Global 2.0.

‘Although it was more challenging than we expected, we haven’t had any lack of demand in the German market and no lack of trust in the travel form of cruises,’ said TUI Cruises CEO Wybcke Maier, as she detailed the extremely high customer satisfaction currently on board TUI sailings, which is higher than ‘in normal times.’

Confident about next year, she claimed re-bookings and cancellations are due to passengers' disinclination towards ‘bubble’ tours and long-haul flights. As a result, special attention is being paid to winter itineraries in the Caribbean: ‘[Customers are] not really willing to do the Caribbean in a bubble, which is kind of understandable, so we are looking for ports and destinations where we can have a safe way of operations but giving customers more freedom.’

In addition to long-haul flights, as with last winter, the line will offer 25-day cruises in the coming months sailing Bremerhaven to the Caribbean. ‘Selling well,’ their purpose is to accommodate ‘some people in Germany who are not willing to jump on the plane and wear a mask for a long-haul flight.’

Celestyal Cruises, resuming operations in March next year and sailing year-round, said demand for cruising in the Eastern Mediterranean is ‘exceptionally high,’ with CEO Chris Theophilides noting, ‘[We] achieved what we wanted to achieve for 2021 and we are really happy to see the reaction of the market… and that manifests itself in a strong environment for spring of next year.’

Silversea will have its entire fleet back in operation by next spring. While agreeing the need for standardisation, Roberto Martinoli, CEO, Silversea Cruises praised the ‘great process put in place’ that has allowed cruising in Europe to make a strong comeback and – together with Theophilides – praised the Greek authorities for their prompt action and support.

But there are operational challenges posed by different guidelines between individual countries and even ports within the same country.

‘I have understood, once more, that the European Union is not unified,’ declared Gianni Onorato, CEO, MSC Cruises. ‘In reality, there has only been a guideline by European Healthy Gateways, so then every country has not only created its own protocol… but also the implementation has been different for each country and has been different for each port, according to the person in charge at that port.’

It was a sentiment supported by Maier, who described the ‘time consuming and intense’ – albeit necessary – task of walking ports through TUI’s health and safety concept ‘no matter what their function is in the port, because we always end up at a next person who has another responsibility, questioning if it is appropriate to do…’ It is one of the reasons, she explained, for the line investing in ‘roadshows’ to outline its protocols.

MSC Cruises has 12 ships in operation – mainly in Europe and the Mediterranean – and is positive that by the end of 2021, 15 of its vessels will be operating globally with the full fleet back by spring 2022. ‘We have been limited mainly to Schengen countries' participation in our cruises,’ said the line’s CEO, ‘Obviously, we are missing all the other customers.’ For the first time, MSC will have one vessel sailing Northern Europe in winter 2021 ‘dedicated to different nationalities,’ with upcoming seasonal cruises also planned in Brazil, the Caribbean, Dubai, the Red Sea and South Africa.

According to Silversea’s Martinoli, there is ‘good news from Australia.’ He explained, ‘The government is opening earlier than expected to Australian nationals to go in and out of the country and this is good in two ways: it shows there is going to be an opening in Australia, and it also allows the Australians to leave the country and go out and take cruises elsewhere.’ The line has four vessels operating currently and will have its entire fleet back in operation by next spring.

‘Sustainability is really at the top of our minds… it’s a given,’ said Martinoli. But while ‘this industry has been doing incredible things about sustainability’ it ‘has been lacking on the communication side.’

Onorato said overtourism and tackling congestion need to be coordinated with governments. ‘We cannot do it alone, we need to do it together with governments,’ said the cruise veteran. ‘We need to be a little bit more aggressive in the way we are also lobbying in Brussels, explaining to the politicians what we are doing and also explaining that taxation will not be the solution to the problem.’

Encouraging a different perspective, Onorato added, ‘Everyone has to make a different [type of] effort - it doesn’t make sense that we are investing in having all ships ready for shore power and then we have it only in very few ports.

‘So in order to be heard, we really need to speak loud.’

Register here for a virtual pass to watch the above in full and other Europe, the Mediterranean and adjoining seas sessions, as well as the entire program from the Seatrade Cruise Global Miami Conference, on demand and to network.