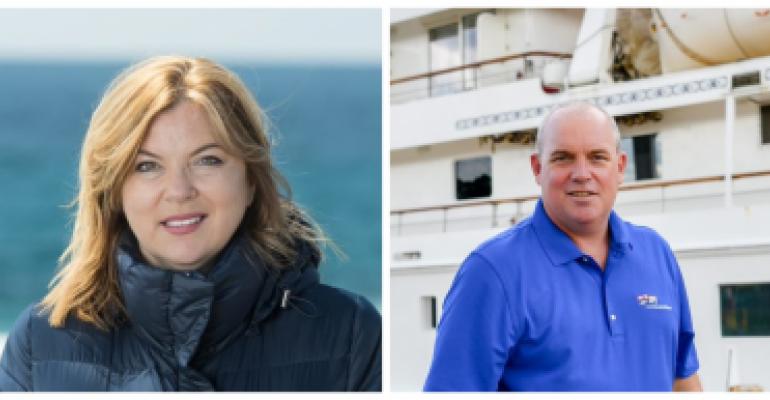 Asia Pacific update participants Monique Ponfoort and Jeff Gillies
‘The message from us is there is definitely a pathway back,’ the commercial director of Cairns-based Coral Expeditions, Jeff Gillies, told moderator Mark Robinson during the Asia Pacific Update session at Seatrade Cruise Virtual Expedition Cruising.

Robinson, who led a panel of four — which also included Monique Ponfoort, the Sydney-based CEO of Australia’s Aurora Expeditions and Singapore-based Francesco Galli Zugaro, who founded Aqua Expeditions 15 years ago — officially took up his job as chief commercial and operations officer of Cruise Saudi in Jeddah in February.

Robinson asked the panel what affect the COVID-19 pandemic had on their companies.

Ponfoort said during the lockdown a lot of time has been spent on future planning.

She said this included plans for Aurora’s first Australian season from July until March next year, subject to regulatory approval.

She said the programme would include the launch of Antarctic cruises from Australia with round trips from Hobart to the Ross Sea and Commonwealth Bay.

‘Once we got back from the initial shock (of the lockdown), we got really busy,’ Gillies said.

He described how Coral Expeditions joined forces with Queensland emergency specialist Respond Global to develop a health and safety management plan called SailSAFE and how the company spent many months training its team.

As an Australian-flagged company, with Australian crew and carrying only 72 Australian passengers, Coral Expeditions was given the green light to commence operations by the Australian government.

Gillies said it has been sailing through the Great Barrier Reef, around Tasmania and, recently, South Australia. He said it is about to restart cruising in Western Australia.

Galli Zugaro said Aqua Expeditions had been caught in the middle of building a new ship in Vietnam — Aqua Nera to operate in the depths of the Peruvian Amazon.

He said the company could have delayed its construction, but instead had ‘doubled down’ to finish the job.

Robinson then asked the panel what lay ahead.

Ponfoort said Aurora is very excited about the future with the arrival of a new ship, Sylvia Earle, at the end of October.

Gillies said Coral Expeditions also has a new ship, Coral Geographer, which will make her maiden voyage this month and its three vessels will be deployed in the Kimberley region from April until October.

‘We will dare to dream a little bit further,’ he said.

He said the company is looking at a series of ‘small islands of the world,’ going through the Indian Ocean to the Seychelles, Maldives, Madagascar and Zanzibar and out across the Pacific Ocean to the Tahitian islands.

‘I am a very positive person,’ Galli Zugaro said. He said there is a lot of ‘passion and love for what we do’ and Aqua Expeditions has a ‘controllable environment’ with between 16 and 20 cabins in its ships.

Ponfoort summed it up for the others.

‘It’s a form of travel like no other,’ she said. ‘It’s a David Attenborough documentary come to life.

‘It touches people’s hearts and souls. In many cases it is life changing, People have cried talking about the experiences.’

Robinson had the last word: The slogan should not be ‘keep cruising,’ but ‘keep on expedition cruising.’