Capt. Kate McCue appointed to helm the new Celebrity Beyond 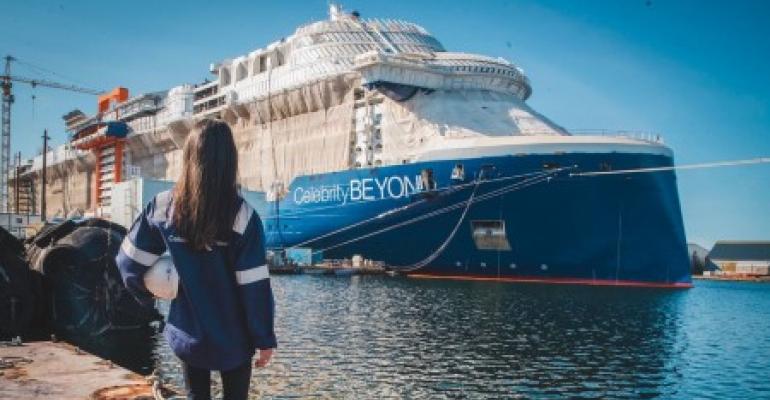 Capt. Kate McCue watched the construction progress for her future ship, Celebrity Beyond

Capt. Kate McCue, the first American woman to become captain of a major cruise ship in 2015, was appointed master of Celebrity Beyond.

How it all began

For McCue, the seed to becoming a captain was planted following a cruise the then-12-year-old took with her family. She told her father she wanted to be a cruise director when she grew up. His advice was that she could do anything she wanted, including becoming captain.

Celebrity Cruises President and CEO Lisa Lutoff-Perlo appointed her to the command of Celebrity Summit in 2015. McCue moved to Celebrity Equinox before being appointed to helm Celebrity Edge in September 2019. On March 8, 2020, McCue further cemented her place in the history books when she led the barrier-breaking sailing on Celebrity Edge with an all-female bridge and officer team.

And McCue was at the helm when Celebrity Edge became the first oceangoing ship to carry passengers from US shores on June 26, following the more than year-long COVID pandemic shutdown.

A voice and example of inclusivity

'This is a day that I've been waiting for since we made the first cut of steel on our beautiful Celebrity Beyond,' Lutoff-Perlo said. 'Capt. Kate has transcended what it means to be a captain as a voice and example of inclusivity, diversity and change. She constantly thinks about how she can go above and beyond, mirroring the exceptional design and imagination of the ship she will captain.'

McCue has become an inspiration to many and as a social media celebrity has amassed nearly 3.5m followers across TikTok, Instagram and YouTube by sharing behind-the-scenes looks at seafaring life.

McCue called her appointment to helm Celebrity Beyond a 'dream come true,' adding: 'I always say that if you see it, you can be it and I hope that Celebrity Beyond sails as an inspiration for all to see past convention in pursuit of any goal in life.'

She also credited Lutoff-Perlo for her 'forward thinking to move the industry beyond what it is now and see what it should be.'