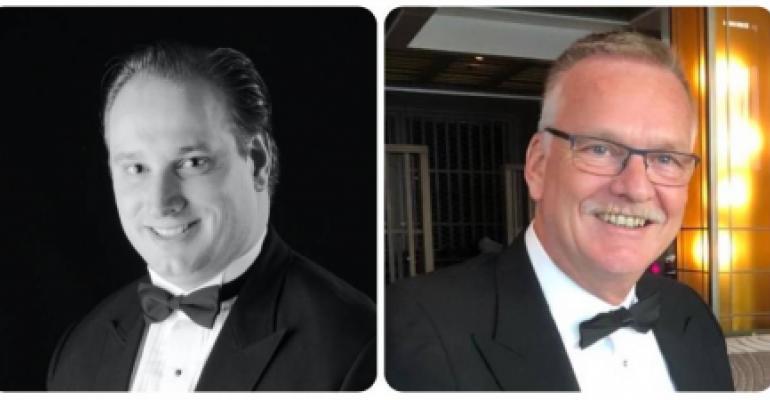 HAL previously announced Capt. Werner Timmers will be at the helm of Rotterdam, scheduled for delivery from Fincantieri’s Marghera shipyard this summer.

Kevin Beirnaert joined HAL in 2006 and worked on the previous Rotterdam, Eurodam, Nieuw Amsterdam, Koningsdam and Nieuw Statendam, where he recently filled in as captain.

Hailing from Ghent, Belgium, Beirnaert earned a master's degree in nautical science at the Hogere Zeevaart school in Antwerp. As a cadet and junior officer, he started his career with freight carrier Ecuadorian Line and on dredging ships in Dubai, on the Palm Jumeirah project before joining HAL. He resides in Las Vegas, Nevada.

Since joining Holland America Line in 2005, Wessel van Oorschot has worked his way through the ranks of the food and beverage department from assistant maître d’ to hotel director. Van Oorschot studied hospitality management at Hotelschool Ter Duinen in Belgium and Baronie College in the Netherlands and started his career at HAL as an intern.

Rotterdam will be the fourth new ship he has launched with the company, having previously introduced Nieuw Statendam, Koningsdam and Nieuw Amsterdam. Van Oorschot lives in the Philippines with his wife, a shipboard doctor with Holland America.

A Dutch native from Drachten in the province of Friesland, Peter Massolt has worked a total of 19 years for HAL, from 1980-87 and then again from 2008 onward. During his time with the company, he has served on Rotterdam, Ryndam, Prinsendam, Statendam, Veendam, Volendam, Noordam, Nieuw Amsterdam and Nieuw Statendam. Massolt holds a bachelor’s degree in marine engineering from the Maritime Institute Willem Barentsz.

Wim Akkerman joined Holland America Line in 1994 following an apprenticeship on cargo reefer vessels. Raised in the small village of Nederhorst den Berg, the Netherlands, Akkerman went to the Zeevaart maritime college and became a maritime officer, but he chose a technical route.

A native of Panama where he still resides, Michael Brown joined HAL in 2016. Previously he was a marine engineer in the cruise industry. Brown graduated from the Universidad Marítima Internacional de Panamá with a bachelor’s degree in nautical marine engineering.