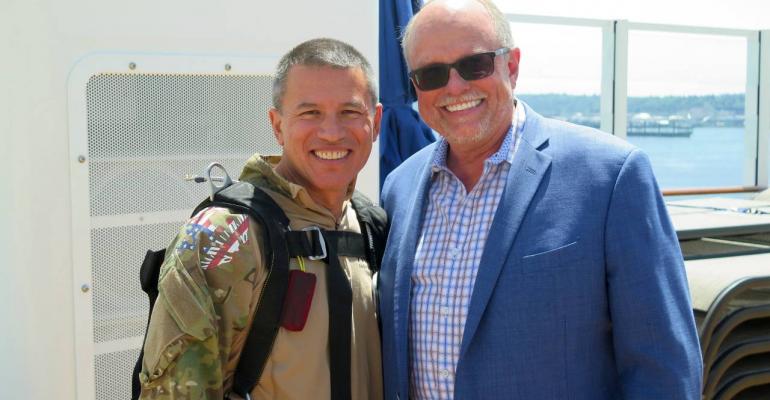 Mike McLaughlin, right, with then NCL President and CEO Andy Stuart at Norwegian Bliss naming festivities at the Port of Seattle in 2018

Mike McLaughlin, director, maritime cruise and marketing, is retiring after 36 eventful years at the Port of Seattle.

McLaughlin has led Seattle's cruise business during a time of tremendous growth and development. He's proud of milestones like the port leading the West Coast in cruise volumes, handling more than a million revenue passengers in 2018 and 2019.

And although the typical Alaska cruise season lasts just a little more than five months, it brings nearly $5bn to the local economy.

In 2019, Cruise Critic named Seattle 'Best North American Homeport,' calling it 'the perfect Pacific Northwest jump-off to the Last Frontier' with 'proximity to major attractions like Pike Place Market, along with Port Valet, a luggage transfer program that provides seamless airport ticketing and baggage delivery — free of charge,' and noting that 'the port is always innovating.'

McLaughlin has represented the port in its dealings with all cruise lines, the community and business leaders, federal agencies and other ports. He also served as chair of the American Association of Port Authorities' Cruise Committee.

The port was the first to establish a long-term berthing agreement (10 years) with Carnival Corp., and it executed a public-private partnership with NCL to expand the Pier 66 terminal through a long-term lease agreement, facilitating mega-ships Norwegian Bliss, Joy and Encore in Seattle.

Seattle has worked collaboratively with cruise lines and the Washington State Department of Ecology for many years to maintain a priority focus on environmental stewardship in establishing a memorandum of understanding that goes above and beyond regulatory requirements.

McLaughlin began his career at the port in 1985 in facilities maintenance and held jobs in asset management, capital development projects and as a senior project manager, completing major capital works in commercial marinas, container/cargo shipping facilities and cruise terminals. He rose to director, cruise operations and security before his current role.

A search will be conducted for McLaughlin's successor.

'The future is bright for Seattle as a homeport,' McLaughlin said, adding his appreciation to cruise lines that have used Seattle as a base for more than two decades. 'I’m pleased to have left my mark on our seaport. This industry is amazing, and I'm so grateful to be a part of it.'

Before departing, McLaughlin's also excited to see the return of cruise ships to the port and noted that today, his last day, two vessels are at dock to prepare for the restart of Alaska cruising.