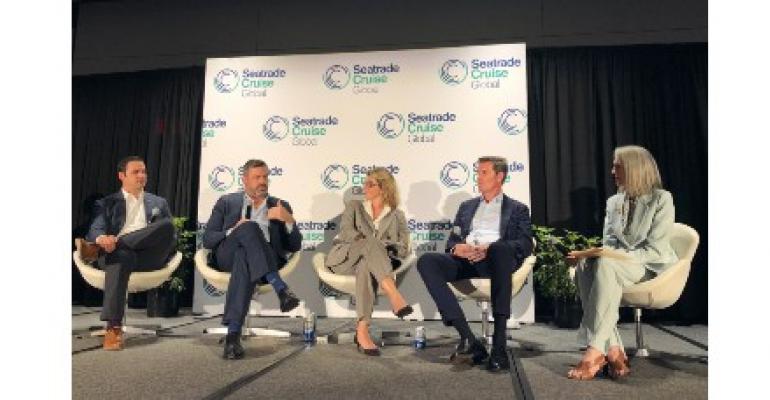 As the cruise industry has matured, it has gone from a seat-of-the-pants business — often family owned and tradition-bound — to a more disciplined corporate structure, one that calls for a deliberate approach to long-term strategic thinking.

At a panel discussion dubbed 'Strategic Thinkers' at Seatrade Cruise Global on Tuesday, executives with strategic vision duties at a variety of entities in the cruise sector discussed how they go about their jobs and how strategy shapes the eventual guest experience.

Among the group was Alfredo Suarez, SVP corporate strategy and development, Royal Caribbean Group, where methodical and quantifiable management methods are just as important as inspiration and innovation to the company’s success.

Suarez said the strategist’s role is to think beyond the immediate time horizon, but not lose sight of what it takes to get through the next quarter. It requires looking past the current set of trends to discern what will still be important in 10, 15 or 30 years. Thinking outside the accepted constraints is a useful skill. So is being able to look both inside the company and outside of it. 'Not just customers, but investors and communities,' Suarez said.

In setting strategy, as important as deciding what to pursue is deciding what not to pursue, Suarez said. Strategists also need to review and cull their handiwork by strengthening the strategies that are working and firmly eliminating those that are not.

Keeping with the times by brand repositioning

Barbara Muckermann, chief commercial officer at Silversea Cruises, said she’s been at the luxury line long enough to have strategically repositioned it twice.

When she was first hired in the early 2000s, Muckerman said the luxury cruise business was a 'sea of sameness,' with names like Seabourn, Regent and Silversea essentially offering the same product in all but name.

To make Silversea stand out, Muckermann hit on the strategy of emphasizing its Italian lineage, which suited the owners, the Lefebvre family of Monaco and Rome. She also made the sales and marketing outreach more global.

The concept of luxury has shifted

More recently, Muckermann said a new approach to luxury was required to appeal to a new generation of luxury cruiser. She terms them the 'Anthony Bourdain generation' after the late street-smart chef. Tailoring a strategy to them meant no longer emphasizing great service, which younger passengers took as a given in the luxury segment, but making authenticity of experience the pole star of luxury.

So, for example, going to Portugal to eat (gourmet) sardines out of a (deluxe) can could be defined as luxury because sardines are such an authentic part of Portuguese dining. 'Everybody has access to the best three-star (Michelin) restaurants. That’s not luxury anymore,' Muckermann said.

Perspectives on strategy were also offered by two executives who don’t work directly for cruise lines. Per Bjørnsen is CEO of V.Ships Leisure, the Monaco-based ship management giant, and Colin Farmer is senior managing director and the head of the management committee at Certares, a private equity partnership focused on hospitality.

Bjørnsen said that while the pandemic had been bad for the cruise industry and the world, it had been an opportunity for V.Ships, which has picked up business and expanded employment to take on new customers.

With fresh capital injected into the industry and changes to lines that previously were not for sale, the strategic role at a ship management company has never been so exciting, Bjørnsen said. He added that the fleet under contract has doubled during the pandemic period.

Likewise, Certares has tripled number of companies it has invested in and doubled its head count during troubled times. The New York-based fund has $7.8bn in assets, including a variety of cruise investments such as AmaWaterways, Mystic Invest Holding, Internova Travel Group (parent to Travel Leaders Group and Altours) and the Avoya travel advisor network.

'We were able to grow through the pandemic,' said Farmer, who noted that Certares may be best known for its role in aiding Hertz, the leading US car rental company, emerge from Chapter 11 bankruptcy brought on in large part by the pandemic-induced travel contraction.