What Seabourn's Josh Leibowitz learned from his whistle-stop ships tour 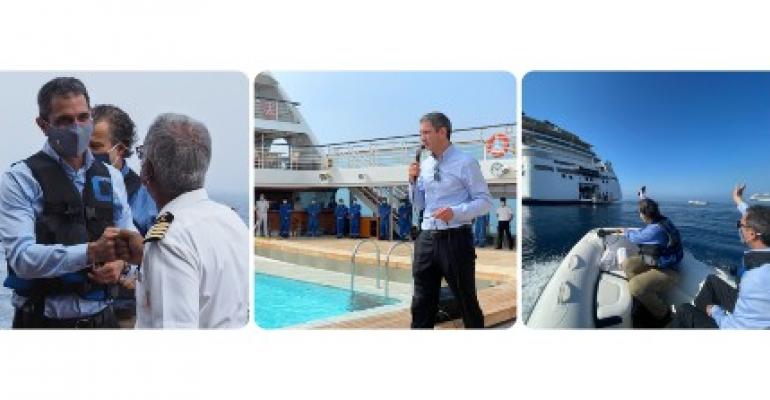 Josh Leibowitz met with a thousand crew across Seabourn ships, including those on three vessels in warm lay up off Cyprus

Seabourn President Josh Leibowitz is just back from a month of ship-hopping that took him from Greece to Cyprus, Genoa to Barbados.

He visited six ships, including newbuild Seabourn Venture, met with a thousand crew, saw crew and guests in tears with the emotion of being back at sea and came away with the conviction that it feels much safer on a cruise ship than anywhere else.

Leibowitz began in Greece, joining Seabourn Ovation July 3 for the line's first cruise since the pandemic. That voyage received the highest rating in Seabourn's history.

'It was phenomenal,' Leibowitz said. 'Our highest ever rated cruise ... We had guests and team members in tears ... [They were] were so emotional about sailing and being back.'

Seabourn ships are operating at reduced capacity for now, though all the premium accommodations are sold out in Greece.

Half the guests new to brand

'We are seeing substantial demand across the board but particularly in our premium spaces,' Leibowitz said, adding that travelers are extending their voyages, and more than half are new to Seabourn.

From Seabourn Ovation, Leibowitz swung by Cyprus to visit the crew on Seabourn Sojourn, Seabourn Quest and Seabourn Encore in warm lay up there.

Then, at T. Mariotti in Genoa, he viewed progress on expedition newbuild Seabourn Venture, scheduled to enter service in December on a new Norwegian winter program.

During his whistle-stop tour, he met more than a thousand team members, hundreds of them personally, in some cases, a handful at a time.

As the pandemic wages on 'nothing is foolproof,' as he put it, but Leibowitz returned feeling very comfortable with what Seabourn's doing to keep crew and guests as safe as possible, and encouraged by the mood on board.