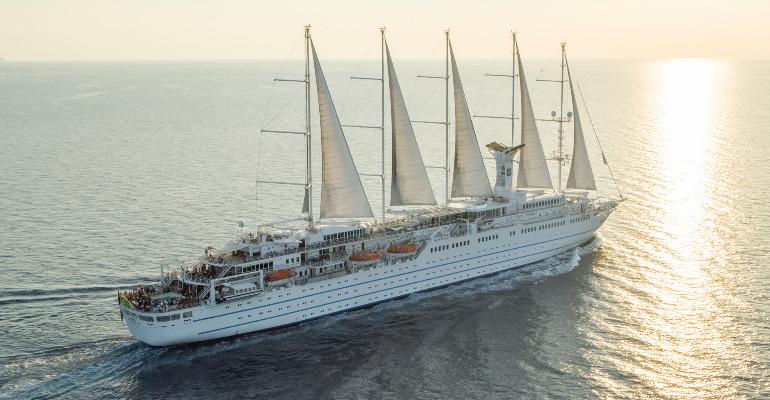 The vessel favours calls in Greece in early September; its transatlantic crossing is scheduled for November 7
Laid up since May 2020 at La Seyne sur Mer, near Toulon, Club Med’s five-masted schooner is to offer new routes across 17 cruises in the Mediterranean, Ionian, Thyrrenian and Atlantic, before making a trans-Atlantic crossing in November.

‘We are happy to start delivering great vacations to our guests again,’ said Thierry Orsoni, Club Med spokesman. ‘Thanks to its shallow draught, our ship will chart this summer, among others, exciting and exclusive French itineraries, calling at their most iconic places.’

An 11-day cruise from Athens to Nice on September 6 will favour calls in Greece, including Cythère, Katakolon and Corfu. Italian highlights comprise Gallipoli, Taormina, Lipari/Stromboli, Sorrento, Ponza and Civitavecchia. The vessel will also call Bastia, Corsica.

Until early October, Club Med 2 will chart a range of shorter four- to six-day cruises, combining Sardinia, Corsica and Italy, before heading to Barcelona and the Spanish coast with a golf-themed cruise.

A transatlantic crossing is planned for the ship on November 7; two new and longer itineraries lead to Dakar, Cape Verde Islands and Gambia.

‘The standstill our ship underwent because of the pandemic gave us the time and opportunity to improve even more our on-board services and provide a unique voyage,’ Orsoni continued. As a result, Club Med 2 has partnered with the prestigious Ferrandi School Paris for Culinary Arts to offer a more refined gastronomy experience to its passengers.

The renovated 110 sq. mtr. spa will collaborate with Sothys, a legendary French skin care brand, and a new Yoga School by Heberson will feature.

A new arts program will be staged by Club Med Talents, while water and land sports remain unlimited; an open bar, snacks, Wi-Fi and gratuities are included in the fare, as in the past.

In addition to adhering to health protocols in keeping with European standards for cruise ships, Club Med 2 has added its ‘Safe together’ rules concerning restaurants and leisure activities and has new digital services. All passengers from 11 years old, as well as those fully vaccinated, will have to produce a negative PCR test result taken within 48 hours before arrival. All passengers will undergo an additional antigen test before boarding.

Cancellation terms have been adapted to reflect the current situation.

One of the two largest sailing ships in the world

Consisting of 184 cabins for some 380 passengers, Club Med 2 is one of the two largest sailing ships in the world and benefits from 2,000 sq. mtr. of open decks.