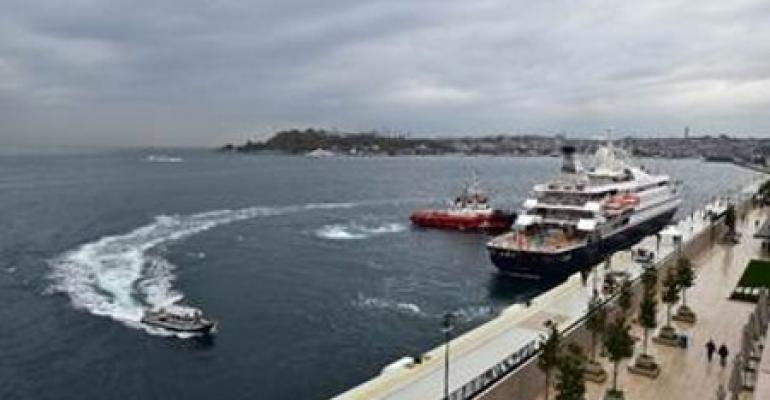 SeaDream II is pictured at Galataport Istanbul today, where it became the first cruise ship alongside

MedCruise welcomed the re-establishment of cruises between Greece and Turkey following the Greek government's decision to lift the ban on ships visiting Greek ports after calling at Istanbul and Kusadasi.

This springs from consistent communication about the status of Turkish ports with the Greek authorities, who came to accept that both Galataport Istanbul and Kusadasi have established and maintained a COVID-19 response plan based on European standards.

MedCruise has been working hard to achieve the resumption of Greece-Turkey cruises. Association President Aris Batsoulis had met and briefed the authorities and national administrations in Greece and Turkey in detail. MedCruise also organized technical site visits of the EU Healthy Gateways joint action team in the ports of Istanbul and Kusadasi to demonstrate the process and protocols aimed at ensuring safe cruising. The site visit was led by Batsoulis and Secretary General Aimilia Papachristou.

In this process, MedCruise said it had the strong support of CLIA Europe, cruise lines and the scientific support of the European Union’s Healthy Gateways joint action team led by Christos Hadjichristodoulou.

As earlier reported, SeaDream II became the first alongside at the new Galataport Istanbul today following a voyage to several Black Sea ports, making it the first such cruise itinerary since the pandemic shutdown. The yacht arrived from Varna, Bulgaria, carrying approximately 150 passengers and crew. It will be in port for two days, and embark passengers for the next cruise, heading first to Burgas, Bulgaria.