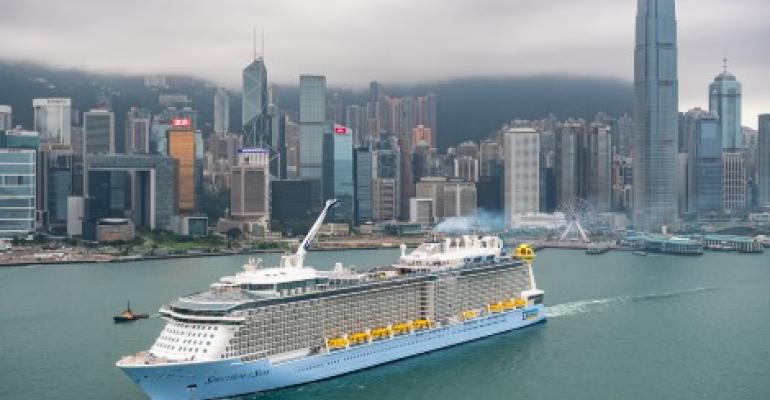 Hong Kong's cruise suspension was extended to April 20 and the Kai Tak Cruise Terminal will be supporting COVID-19 mitigation efforts by providing housing.

Hong Kong requires the isolation of anyone testing positive.

'After only around 12,000 COVID cases in the first two years of the pandemic, Omicron has entered the community in Hong Kong, and we are seeing infection rates that are low by international standards, but higher than we have experienced locally,' said Jeff Bent, managing director of Worldwide Cruise Terminals, operator of the Kai Tak Cruise Terminal. 'The Hong Kong SAR government is making "community isolation facilities" for people with no or mild symptoms to stay out of circulation until they are non-infectious. Some of these are greenfield construction projects, some are repurposed existing buildings.

'At the Kai Tak Cruise Terminal, we are happy to support the anti-epidemic efforts, and will let the government use our spacious check-in and baggage halls to house up to 1,200 of these asymptomatic and mild case patients, as well as space for their carers,' Bent told Seatrade Cruise News.

'The terminal can be made ready for cruise operations in a few days’ time when policy allows. There have not been structural changes to the building, and we have retained use of the 850-meter apron,' he added.

The terminal hosted a technical call for provisioning and bunkering of Spectrum of the Seas on Feb. 22 and will do soon again Feb. 28. The public car park, rooftop garden and restaurants remain open to the public.

Hong Kong cruising resumed last year with Genting Dream in July and Spectrum of the Seas in October but was halted in early January as part of wide-ranging government measures to stem transmission of the Omicron variant. Royal Caribbean in early February canceled the balance of the balance of the season for Spectrum of the Seas and the ship is going to redeploy to Singapore six months earlier than scheduled.

'When cruising can restart is a policy decision,' Bent said. He noted Hong Kong’s population aged 12 and older is nearing 90% inoculation, the under 12s are quickly catching up, and the mortality rate in the latest wave is 0.03% for vaccinated people, less than influenza at approximately 0.1%. The new medicinal treatments, which should lower mortality and hospitalizations even further, will become available locally soon.

'Hong Kong already restarted cruise once ... so hopefully it will be easier to restart again the second time around,' Bent said.

The timing for a restart depends on local COVID policy and several other factors including availability of ships in the region.

'We hope that more nearby markets in Asia and also Australia/New Zealand will reopen to cruise soon, to help justify deployments in the Pacific,' Bent said.

Another factor is the length of the Alaska season, as Hong Kong typically gets redeployments to Asia after Alaska cruising ends. Bent said the large number of Alaska deployments this summer is a positive for Hong Kong.

Genting Hong Kong's restructuring of Dream Cruises also plays a role. Genting Dream had been scheduled for regular calls through 2022.

Bent noted the local source market 'took strongly' to cruises to nowhere in 2021.

'Many guests were new to cruise, 50% according to our surveys, and cruise lines said that the satisfaction rates were through the roof.  We believe this is a strong indicator of the potential of the Hong Kong source market, as soon as cruise is allowed to resume,' he said.