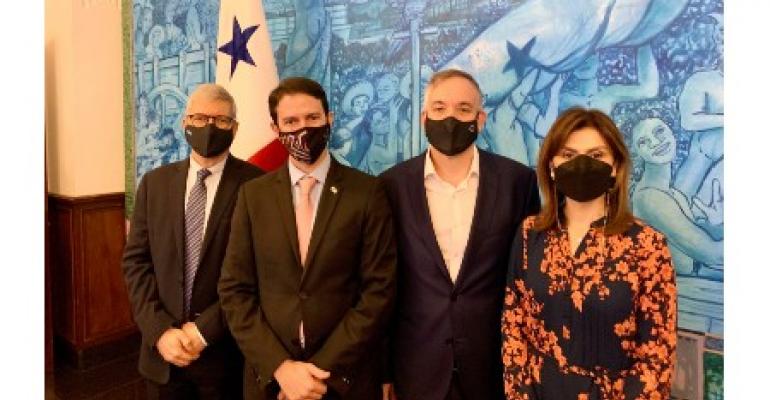 The country will reimburse the cost of Panama Canal transits until 2024, in exchange for turnarounds and a commitment to increasing local provisioning.

When ships homeport, that benefits the airport, hotels and other businesses that support pre-/post-cruise stays. Panama aims to become a destination, not just a pass-through.

So the signing with NCLH is a 'very, very important moment' and a 'historic one,' according to Panama Tourism Authority Administrator Iván Eskildsen.

'This will herald a new beginning, not only for the cruise industry but for tourism in general and definitely for the economy as a whole,' he said.

Homeports on both oceans

The country now offers two homeport-capable cruise facilities. The new $165m Panama City Cruise Terminal at Amador on the Pacific recently handled its first ship. The marine structures are complete, and the terminal is due to be ready in May. The facility has the capacity for two large vessels and 5,000 passengers simultaneously.

The well-established Colón 2000 on the Atlantic, which supported Pullmantur turnarounds, is expanding with Panama's only duty-free mall that will offer shopping, dining and entertainment. 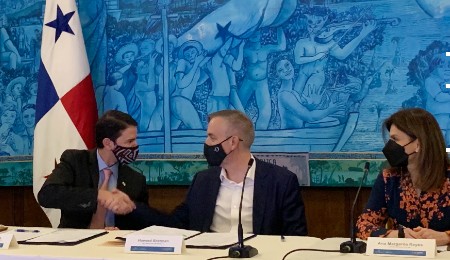 Panama and NCLH were set to ink the agreement in March 2020 when the pandemic shut down cruising. It's 'even more profound that we sign it now at the reopening of the world to tourism,' said Howard Sherman, EVP on-board revenue and destination services, NCLH.

Sherman praised Panama's 'partnership and visionary approach to tourism, taking a leadership role not just locally but across the region.' The incentive program will be 'beneficial not just for the commercial aspects to the people of Panama but for our passengers who'll have the joy of experiencing this nation as more than something they see out of their ships as they're transiting the Canal. Certainly Panama has so much to offer.'

Today's travelers want to experience local food and culture and it's always good to be able to tell passengers their produce is sourced locally, Sherman added. Plus, given the current supply chain issues, 'There's many blessings that will come from sourcing local products.'

All three NCLH companies — Norwegian Cruise Line, Oceania Cruises and Regent Seven Seas Cruises — visit Panama. Nine homeport calls are planned at the Pacific Cruise Terminal starting with Sirena Feb. 1 and including Norwegian Jewel and Gem, to mid-March 2023. Norwegian Jewel is set to begin homeporting at Colón March 29, with seven calls through March 2023, while Norwegian Pearl, Bliss, Breakaway and Sky are booked for a total of 17 transit calls at Colón from Dec. 27 this year through April 2023.

Shorter itinerary for a new market

Transiting the Panama Canal is a bucket-list item for many travelers, he continued, so these are high-yielding cruises. Now, with homeport terminals on both the Pacific and Atlantic, this created a 'perfect scenario' for NCLH to attract a new market by offering a shorter itinerary that's still packed with content.

Money saved from the Canal dues can be put toward marketing, Moeller said.

He thinks the new Amador terminal offers one of the best city views of any homeport, and 'I love what they did in Colón, too.'

Eskildsen said Panama provides a 'wealth of rich experiences' including World Heritage Sites, a vast rain forest, biodiversity, native cultures and 500 years of history including the world's first trans-oceanic railroad which transported goods across the isthmus before the Canal was built.

Panama has been working with neighboring countries to come up with innovative itineraries, while seeking discerning travelers looking to connect with nature, culture and local communities. For this reason the expedition cruise sector is also specifically targeted in the country's sustainable tourism development plan.

Lindblad Expeditions is taking advantage of the homeporting incentive, too, and active discussions with other companies continue.

Eskildsen sees a 'big opportunity' for Pacific destinations, which have been less frequented by cruise ships. He cited the 'untouched Isla Coiba,' a national park that's a UNESCO World Heritage Site, and said countries like Costa Rica also have rich natural and cultural allures.

'I'm very positive about this new era we're heralding with [terminals on the Atlantic and Pacific],' Eskildsen said. 'Panama is this bridge to the world.'