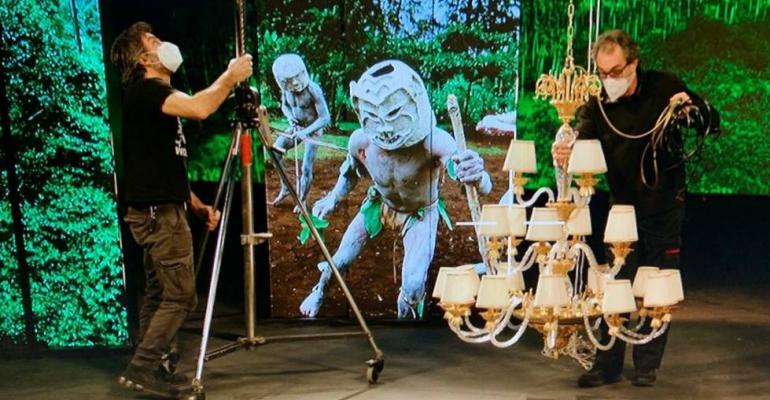 The premiere, ‘South Side Story — All the World’s A Stage,’ featured a pre-produced show — Silversea’s largest creative production. It was hosted by Fernando Barroso de Oliveira, Silversea’s president’s ambassador to the Venetian Society. A question and answer session followed with Roberto Martinoli, president and CEO, and Barbara Muckermann, chief marketing officer.

The event marked the opening of an exclusive pre-sale to past and future world-cruisers.

'We are continuously seeking innovative ways to nurture our strong relationships with our guests, Silversea’s extended family, as we await the moment in which we can be reunited aboard our ships once more,' Martinoli said. 'As is the case on board our ships, we are committed to delivering special moments that exceed our guests’ expectations and our investment in our world cruise 2023 premiere encapsulates this commitment.'

Replicating the production of a cinematic film, the show was five weeks in the making by a team of more than 50 professionals. Filmed over a week, it included 18 sets, each accompanied by props in front of a 452-square-foot LED backdrop. The team recorded more than eight hours of footage — files totaling 800TB — before crafting a 27-minute narrative that was designed to transport viewers to the featured destinations.

The 2023 world cruise is called 'South Side Story' because it takes inspiration from the Southern Hemisphere’s most captivating cultures, according to Jose Vuolo, Silversea’s global creative director. 'It was fitting, therefore, to leverage on the famous Shakespeare phrase, "All the world’s a stage," which is an invitation to our guests to play their parts in this great story, while enjoying the spectacle of the world,' he said.

The team created a theatrical performance with advanced film technology. Vuolo credited the inspiration of passionate travelers such as de Oliveira with his incredible stories, and the acclaimed photographer Steve McCurry, who showed him how to look at the world differently, and whose photos enrich some of the show’s most evocative sets.

66 destinations in 34 countries over 139 nights

The 2023 world cruise will depart Sydney on Jan. 9, arriving at Fort Lauderdale on May 28. Over 139 nights, Silver Shadow will call at 66 destinations in 34 countries. Forty destinations have not been visited on Silversea’s recent world cruises.

There will be 20 overnight stays in 17 cities and 10 bespoke events, including five that are exclusive to full world cruisers.

For the first time, Silversea will include door-to-door service, transporting travelers to Sydney starting with private executive transfers from their home to the airport with private assistance to their gate/lounge and airline lounge access. From select US and UK gateways, they'll fly in Qantas business class then get VIP arrival assistance, private executive transfers and priority embarkation.

'South Side Story' itinerary highlights include in-depth exploration of Tasmania and New Zealand; Melanesia’s lesser-travelled coasts, including Papua New Guinea for the first time on a Silversea world cruise; and an immersion into Southeast Asia with overnights at places like Hong Kong, Bangkok and Ho Chi Minh City.

Further highlights include the Gulf of Bengal and the Indian Ocean, including opportunities to explore deeper inland; a three-day exploration of Madagascar and calls at Mauritius and Réunion; seven days on Africa's west coast, starting with South Africa; an immersive trip into the Amazon River; and new Caribbean experiences including maiden calls at Ile Royale and Mayreau.

More details will be revealed in due course, Muckermann said.