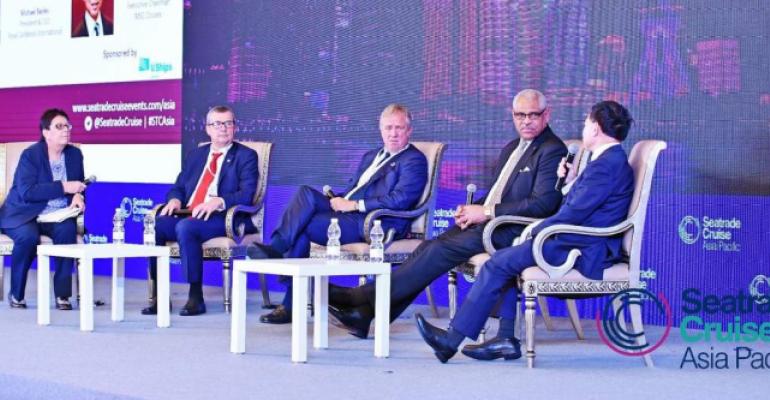 Seatrade Cruise Asia Pacific- the leading trade event for the Asia Pacific cruise industry had it’s opening session today with a strong message to delegates that high quality, long-term growth and sustainability are amongst the key priorities for 2019.

During the opening remarks, Bayley commented ‘If I had one word to describe the Asia Pacific cruise industry, it would be astonishing; China is the driver of significant progress in the market’.

He also announced the name of its 5th Oasis Class ship ‘Wonder of the Seas’ which will debut from its homeport of Shanghai in mid-2021. The 227,000gt vessel is being built at Chantiers de l’Atlantique and further outlines Royal Caribbean’s commitment to the China market.

The session opened with moderator Mary Bond Group Director of Seatrade who firstly asked if it was fair to say that the cruise industry has confidence in the China cruise market following the positive opening remarks from all the panellists and if there were any challenges to overcome looking to the future.

“We are at the beginning of a journey”, stated Vago who clarified the importance of developing the China cruise offering to mirror those elsewhere in the world where cruises present a variety of on-board experiences with “a choice of restaurant each evening” and the prospect of “waking up to a new city each day”.

Moderator Bond continued the session by asking how cruise lines view the wider Asia Pacific market and what their strategy was for these markets?

“There’s so much opportunity. I do see growth here”, commented Donald. “The test is to convey what cruise really is in China”, he continued, “It is one of the most vibrant areas of the world.”

He explained the importance of marketing such as social media and the power of the word of mouth, “Social media is a great tool to share spirit and to inspire. People trust people - once the Chinese start cruising they won’t stop.”

Wrapping up the session, moderator Bond asked each of the executives when they thought China may take over as the number one global source market.

Colin Au, Group President, Genting Hong Kong; was bullish about China’s growth potential: “Many people think that China can surpass the US in 2030 to become the world's largest cruise source market,” he remarked. “But the current 12m US passengers is six times that of China at 2m cruise passengers so we feel it is impossible to surpass the US in 2030.”

He continued, “if China continues to grow at a 10% steady annual growth and the US has a slower mature 4% growth, then China will need 30 years to surpass the US, so it will take until 2049.”

Donald estimated that China could become the number one source market by 2030; nearly 20 years before Au’s prediction but stressed it was dependant on available capacity.

The 2030 prediction was also echoed by Vago who stated that “the key to promote growth in the Chinese market is to build partnerships”. The panel discussion ended with Bayley who humoured the delegate audience that packed the Delta Hotel Ballroom with a projection that China would take the number one spot in 2029.

Notes to the editors:

Seatrade Cruise Asia Pacific welcomes over 1,000 cruise industry professionals to learn about the latest cruise developments; hear from renowned industry experts and meet with like-minded individuals. Featuring a broad conference agenda, the event caters to everyone involved in the Asian cruise industry including ports; destinations; suppliers; ship builders; Shorex providers; tourism authorities; cruise lines and more. With a Showcase Pop-Up Zone and dedicated networking events complimenting the event. Seatrade Cruise Asia Pacific is the destination for those seeking to do business across Asia Pacific's cruise market.