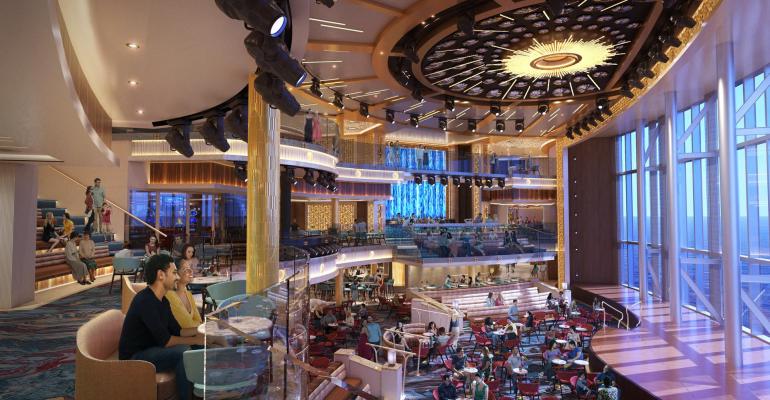 Atriums have been a focal point on cruise ships for decades. Carnival Cruise Line is transforming the space aboard the new Mardi Gras.

Grand Central, one of six themed zones on the ship scheduled to debut in February, spans Decks 6, 7 and 8. Massive 3,000-square-foot glass panels built into the starboard side provide views from comfortable seating or while strolling past.

'Take your breath away' moment

According to Glenn Aprile, Carnival’s director of newbuild product development and part of the design team that developed Grand Central, the idea was to create a space as functional as it is eye-catching, while providing a 'take your breath away' moment when passengers first board.

'Building an atrium into the side of a cruise ship is no easy task and it was a total team effort between our newbuild management team, engineers, designers and hotel and entertainment teams to create a space that is as beautiful as it is functional,' Aprile said.

During the day, Grand Central serves as a relaxing spot for coffee, a drink or light fare, people-watching, live music and trivia contests. At night, the space transforms into an intimate and immersive venue with a rotation of soon-to-be-revealed experiences created for Mardi Gras. Performers will interact with 16 individually controlled six- by 14-foot LED screens displaying video and special effects, as well as lasers and aerial feats.

'We wanted to create a multifunctional dining and entertainment space that guests can enjoy day and night,' Aprile said, 'while at the same time providing an intuitive way to get around the ship and creating a dramatic centerpiece that is worthy of our most innovative ship.'

Overlooking Grand Central is the multi-level Grand View Bar with floor-to-ceiling sea views and design touches like a virtual waterfall on translucent panels. There’s also the Center Stage Bar on the main level. Both venues will feature specialty cocktails inspired by the theme of that evening’s entertainment.

Steps away is Java Blue, serving coffees, cappuccinos and lattes as on other Carnival ships, plus a menu of fresh bakery items, wraps, salads and other light fare. The Cherry on Top sweets shop is also nearby, as are the retail shops and casino.

Connecting all of these spaces are a series of spacious and airy promenades and bridges.

Aprile said Grand Central is 'unlike anything that’s ever been done on a cruise ship before,' adding: 'Our guests are going to love it.'