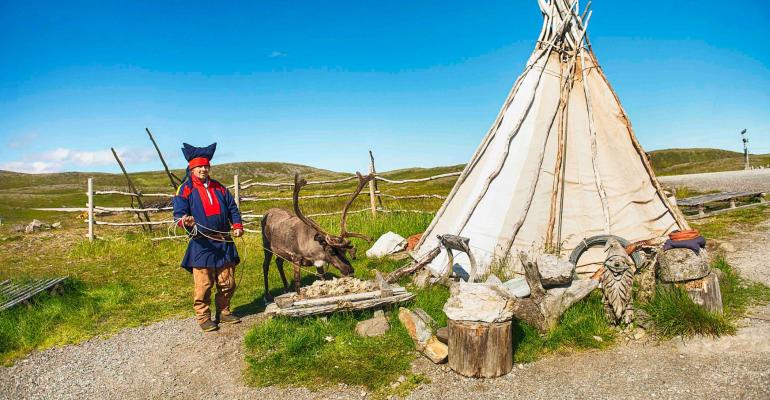 Many of the sailings will maximize time above the Arctic Circle. Here, a Sámi camp near the North Cape

Hurtigruten expedition sailings exploring the Norwegian coast will be offered year-round from Dover, Hamburg and Bergen, starting in January 2021.

'We have seen an increasing demand for closer-to-home departures. We expect this to further increase in the wake of COVID-19,' Hurtigruten CEO Daniel Skjeldam said.

Plying the Norwegian coast since 1893

Hurtigruten ships have operated continuously on the Norwegian coast since 1893, and the line is the only one to sail year-round there.

The new itineraries offer more time in port for in-depth experiences, and change with the seasons to take advantage of the midnight sun in the summer and the northern lights in winter.

From Hamburg on Otto Sverdrup

From northern Germany the sailings will operate on Otto Sverdrup (currently Finnmarken), with two different summer and winter itineraries to the North Cape and back. Time above the Arctic Circle will be maximized to see the northern lights and explore the Lofoten Islands. The fjords are also featured.

From Dover on Maud

Ex-UK cruises, previously announced for October 2021 to March 2022, are now expanded from Dover on Maud (currently Midnatsol). A winter itinerary will maximize time above the Arctic Circle and include an overnight stay at Tromsø. Summer cruises will travel to the North Cape and back, exploring fjords, mountains and the Lofoten Islands. In addition, two new summer itineraries will explore the British Isles and off-the-beaten-track destinations in southern Scandinavia.

Sailing from the fjord capital of Bergen, Trollfjord will maximize time spent exploring the Norwegian coastline to the North Cape and back, including lesser-frequented destinations such as Reine in Lofoten, Fjærland and Træna.

Just over 500 passengers per ship

Otto Sverdrup, Maud and Trollfjord each carry just over 500 passengers. Built for the Bergen to Kirkenes route, all three ships will undergo major changes, as earlier detailed, before entering their new expedition service.

The new Science Center aboard each ship will offer literature about the nature and culture on the coast and technology like touch screens and microscopes. There, travelers can learn from the expedition team about geology, ornithology, history, phenomena such as the northern lights and the natural sciences.

Maud and Otto Sverdrup will be fully upgraded with new cabins and suites that incorporate natural Scandinavian materials like wool, pine, birch, oak and granite to bring the great outdoors inside.

As part of its sustainability efforts, Hurtigruten is introducing biodiesel to supplement the fuel for several ships, including Maud, Otto Sverdrup and Trollfjord. Biodiesel reduces emissions by up to 80% compared to regular marine diesel. Hurtigruten’s certified biodiesel is produced from fisheries and agricultural waste; no palm oil is used.

The three ships are also equipped for shore power and, as with the rest of the fleet, single-use plastics are banned on board.