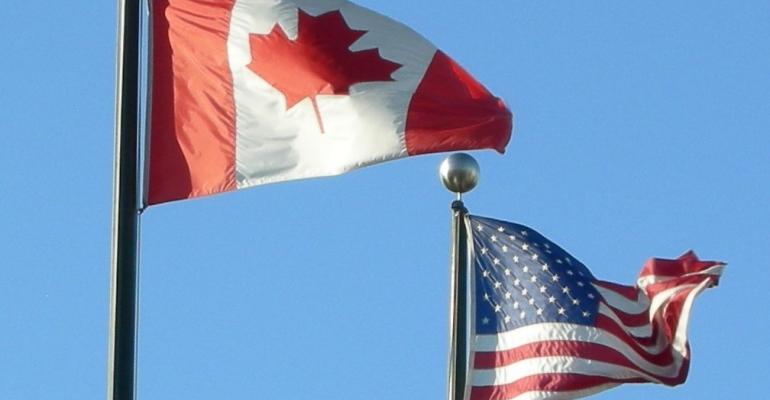 Both efforts, seen as longshots, are attempts to enable cruising to restart in North America following Canada's decision to block ships carrying more than 100 people.

In a letter to the ambassador of Canada to the US, House of Representatives Transportation Committee leaders asked to work toward a 'mutually agreeable solution' to enable cruising to resume while protecting citizens' health.

'While the cruise industry continues to work with the US Centers for Disease Control and Prevention to resume cruising from US ports, and as the trajectory of the virus moves in a positive direction, we need to work in partnership with the Canadian government to enable the reopening of critical sectors of the US and Canadian economies while ensuring the safety of U.S. and Canadian citizens,' the letter said.

The lawmakers noted 'Canada plays an integral role in supporting US cruise-related travel and tourism in Alaska, Washington state, the Great Lakes and New England. Pre-pandemic, the cruise industry generated $2.85 billion in direct economic spending in these US regions combined, including more than 53,000 jobs and $3.1 billion in wages.

'The pre-pandemic economic impact of cruise-related travel in Canada is also significant, with the cruise industry generating nearly C$2 billion in direct economic spending, along with 30,000 Canadian jobs and more than C$1.4 billion in wages and salaries. By closing Canadian ports to passenger vessels for another year, the livelihoods of tens of thousands of Americans and Canadians are at risk from more job losses and further economic devastation.'

'It is our hope that this solution would both address the important health concerns of Canadian authorities and allow cruises to resume with the approval of US government authorities when it is deemed safe to do so,' the letter said.

However, cruise lines and ports have continued to lobby for a change in heart.

Commenting on the letter, Cruise Lines International Association thanked 'Chairman DeFazio, Ranking Member Graves and other signatories of the House Transportation and Infrastructure Committee for their leadership in facilitating dialogue with the Canadian government to determine a path for resumption of cruises to Alaska should cruising resume in the US this year.

'CLIA looks forward to working with the Canadian and US authorities on a solution that addresses the public health needs of Americans and Canadians alike, while responsibly restarting a critical economic driver for the Pacific Northwest and Alaska,' the association said.

On Wednesday, Young introduced the Alaska Tourism Recovery Act that would provide a temporary Passenger Vessel Services Act workaround by deeming round-trip voyages between Alaska and Washington state as foreign voyages for the purposes of US law. The provisions are temporary and would only apply during the closure of Canadian waters and ports.

During Norwegian Cruise Line Holdings' business update Thursday, President and CEO Frank Del Rio expressed cautious optimism that Canada may decide to lift its cruise ban earlier than a year from now, as the public health situation is likely to improve.

CDC is key, no matter what

Of course, key to it all is the CDC advancing its framework for conditional sailing order. Technical instructions are awaited from the agency to get cruise ships beyond the first step of compliance.