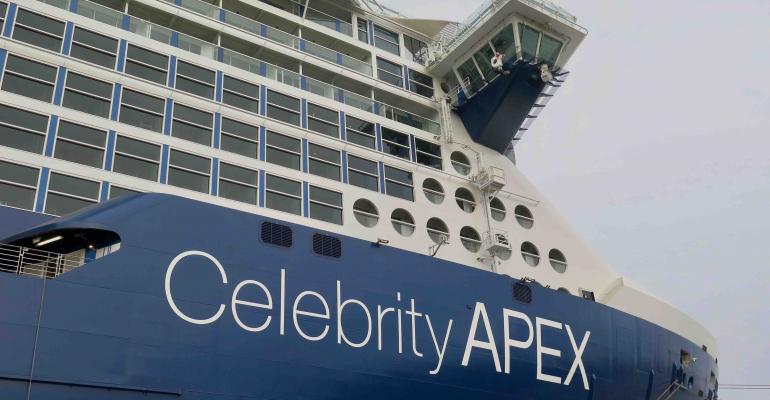 The hand-over came amid a rise in coronavirus cases among the crew, who have been aboard the ship for some time
In what may be a first, Celebrity Cruises executives today took virtual delivery of Celebrity Apex via video conference with Chantiers de l'Atlantique officials.

In keeping with tradition, Capt. Dimitris Kafetzis ordered the exchange of the French and US flags, while each country’s national anthem played in the background.

'While the circumstances are quite unique right now, it’s fitting that such an innovative ship as Celebrity Apex would have a digital-age delivery,' Celebrity President and CEO Lisa Lutoff-Perlo said. 'The day is every bit as meaningful because I know the dedication and commitment from the shipyard team, the on-board crew and our Celebrity shoreside team that went into bringing this ship to life.'

'We had the honor of building the first Edge series ship, Celebrity Edge, and so many wonderful ships throughout our partnership over the years,' said Laurent Castaing, general manager, Chantiers de l'Atlantique. 'Celebrity Apex is exceptional, and we know she will be well-received and enjoyed for many years to come.'

May 20 debut in Barcelona

Lutoff-Perlo also expressed 'great anticipation' for the first Celebrity Apex sailing from Barcelona on May 20.

Inaugural festivities at Southampton were canceled earlier in light of the public health crisis. But, until today, it wasn't clear when sailings might begin. Earlier this week, the Royal Caribbean Cruises Ltd. group extended its suspension of operations until at least May 12.

The hand-over came amid a rise in coronavirus cases among the crew, who have been aboard the ship for some time and not allowed ashore in line with public health regulations aimed at stemming transmission. According to Saint-Nazaire regional television on Friday night, 29 people had tested positive and one person was taken to a local hospital with breathing problems.