Catching up with Bob Dickinson 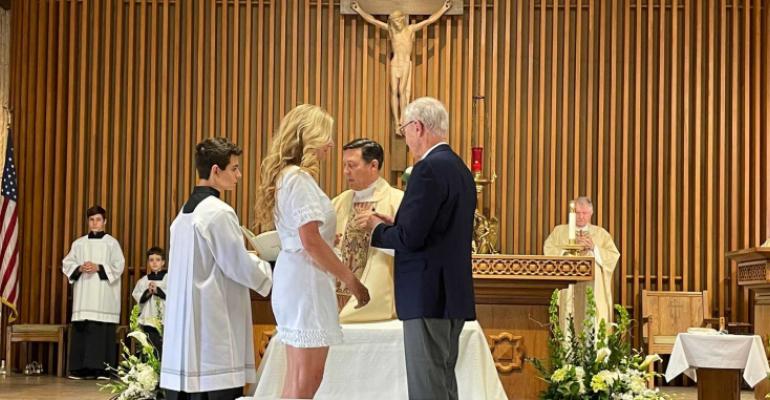 Bob Dickinson, one of cruising's iconic figures as a former president/CEO of Carnival Cruise Line, was in the spotlight Saturday for a personal reason — his wedding.

At a Coral Gables, Florida ceremony attended by industry colleagues and friends, Dickinson tied the knot with Andria Hanley. Both are involved with Camillus House, which provides humanitarian services to the indigent and homeless populations in Miami-Dade County.

Dickinson is chairman emeritus and very active in the charity where he's played a role for 26 years, while Hanley is VP development. In fact, he hired her. Hanley had come to Dickinson's attention when she led the Coral Gables Community Foundation and, seven years ago, he recruited her to Camillus House.

'She was the best mentee short of Vicki Freed,' said Dickinson, referring to the current SVP sales and trade support & service, Royal Caribbean International, who served under Dickinson at Carnival as SVP sales and marketing.

Hanley and Dickinson's relationship as colleagues and 'just friends' ultimately deepened, and she supported him through his 2019 bout with pancreatic cancer. She visited every day, prepared meals and they made frequent trips together, which took his mind off the chemo treatments. Dickinson beat the cancer.

Dickinson is busily preparing for a Camillus House live auction fundraiser and his chat with Seatrade Cruise News was punctuated by calls from Crystal's Carmen Roig, SVP marketing and sales, to donate a Crystal cruise, and from Verité, a boutique winery, contributing an exclusive trip to its Sonoma County, California vineyard.

(Dickinson, a noted wine connoisseur, once had a cellar of 20,000 bottles, which he estimated is now down to 5,000 or 6,000 since he's donated or sold many. He still enjoys drinking wine, favoring Bordeaux, California cabernets, white Burgundies and Champagne — especially Champagne aged over 30 years.)

'I have a ton of energy. I love what I'm doing,' Dickinson said. Camillus House operates 12 facilities that domicile 1,600 men, women and children, and provides job training and recovery programs for substance addiction and victims of sex trafficking.

'The cruise industry has been hugely supportive. NCL and Carnival have given millions,' he noted. 'All the lines have donated cruises and a number have provided sponsorships for our annual gala. Cruise industry vendors have been supportive, too.'

Dickinson is impressed how the cruise giants are weathering the pandemic, raising funding and shedding less competitive assets.

'They've done a good job,' he said, adding that the stock market has been 'unbelievably buoyant' and government stimulus programs have helped keep the economy afloat. Lines are doing their best to comply with the Centers for Disease Control and Prevention, an agency he described as 'remarkably risk-averse.'

Dickinson expects the US to achieve herd immunity by summer but he's concerned about the destinations ships visit.

On the shedding of assets — like some of those in the Carnival Fantasy class that were among the dazzlers during his Carnival years — he's not sentimental.

'They were very successful. They all made a lot of money. And it's time. There has to be a certain amount of reinvention,' Dickinson said, adding that it won't be possible for lines to resume with their full fleets and it doesn't make sense to lay up ships for an extended period.

Though Dickinson is sometimes cited in the media, he's not consulting for anyone and is merely 'kibitzing.'

He remains a keen industry observer, though, and is 'singularly impressed' with Viking and how Torstein Hagen's gambit with his first ocean cruise ship in 2015 has blossomed into a successful and fast-growing niche with six ships and many more to come.

And Dickinson's still an avid cruiser, having sailed in recent years with Seabourn, Carnival, Viking, Silversea, Norwegian Cruise Line and SeaDream Yacht Club, among others.

For his honeymoon, he would have liked to take back-to-back cruises but, given the shutdown, the newlyweds are going to Palm Beach instead.